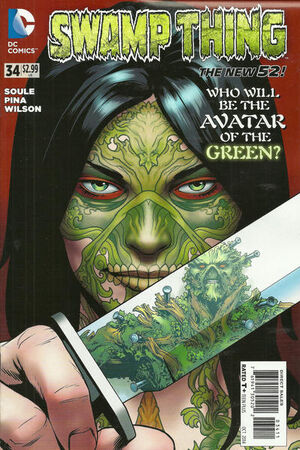 I have lived for a thousand years. That is more than long enough to recognize evil when I see it. Your great faith in humanity does you credit -- but it blinds you to the fact that the Wolf and Lady Weeds are no longer human.

Appearing in "The Wolf and the Lady, Part Two"Edit

Synopsis for "The Wolf and the Lady, Part Two"Edit

In the Swamp Thing's absence, The Lady Weeds and The Wolf have gravely wounded Brother Jonah. Horrified, Capucine rushes down into the swamp to retrieve the small part of Alec that he left behind to look in on The Green and forces it to look at what the two former Avatars have wrought. Alec leaps back to Louisiana, looking to Jonah's health, though Guarav warns that he won't survive much longer.

Hoping to make an escape from the Swamp Thing's purview, the Lady Weeds stands at the edge of the road waiting for a car to pass by. The Lady Weeds warns her companion that as soon as Alec realizes what they did, he will use the plants to try to find them. They must succeed in their efforts now, or die forever. Unlike the Wolf - who has been transformed into a deadly creature - Lady Weeds does not plan ahead. What she wants is to destroy Alec Holland, take his avatar body, and restore the Wolf as her Parliament of Trees. She will therefore require his cooperation in everything to come.

Having fallen in love with Jonah, Capucine demands justice, swearing that both Wolf and Lady Weeds deserve death for their actions. Alec is doubtful, reminding that they don't know for sure what happened - especially with Jonah unconscious. Tearfully, Capucine states that she has lived for a thousand years - quite long enough to recognize evil when she sees it. Alec's faith in humanity has blinded him to the fact that the escapees are no longer human. Rather than let her seek them out and kill them, Alec decrees that their first course of action will be to get Jonah an ambulance. The man wakes, though, and begs Alec to take him to the grove of the Parliament instead.

In New Orleans, Lady Weeds has the man who picked her up on the side of the road drive her to the hospital. She demands he give her his lighter and his vehicle. He promises to give both up without telling anyone what he saw, but she stabs him through the throat anyway. Stepping out of the truck, she then sets the park next to the hospital on fire and releases the Wolf from the back of the truck.

In the grove, Jonah begs to be allowed back into the Green to serve as Alec's Regent - not Parliament. He has lived long enough as a man, but his use has not been spent, and he would rather serve the Green than fade away. Begging a private moment with Capucine, she begs him to tell her why he has given up this second chance. He responds that he was always going to die, and while this is sooner than he'd hoped, he did get his second chance, and that was lucky and joyful enough. He begins to choke on his own blood, and Alec intervenes, warning that there is little time left. As he carries Jonah into the pool of the Green, the man explains that he makes this sacrifice based solely on his understanding of the kind of man that Alec is. He wouldn't have done this for every Avatar. As a last request, he begs Alec to finish reading his book, One Hundred Years of Solitude, so that he can see the rest through his eyes. Solemnly, Alec releases the body to the Green, and within moments he senses the fire Lady Weeds caused and excuses himself.

Alec has taken the bait, and he arrives at the hospital to see the blaze next door, and the blood spattered all over the hospital's windows. Grimly, he witnesses the carnage that the Wolf has wrought. Alec and the creature battle, but this is all part of Lady Weeds' design. The Wolf is meant only to delay and distract while she returns to the swamp and seeks out Guarav. She demands of him to serve every avatar - including herself. In the hospital, Alec is disconnected enough plant life in that sterile environment that he cannot leave his body, and the dying plants in the park cannot serve as his eyes. This allows the Wolf to escape, and wait until daylight.

Come morning, Lady Weeds and Wolf return to downtown New Orleans, and take a pair of hostages, calling on Alec to come to her. Alec obliges, but she warns that if he attacks, the Wolf will kill their hostages. Lady Weeds explains that she is well aware that despite all whom the Wolf killed the night before, Alec would do anything to prevent him from killing too more. Alec's only recourse is to kneel and let Guarav put her into the Avatar's body. Alec refuses, and so Lady Weeds commands the Wolf to injure his hostages. He hesitates, though, and she taunts his cowardice. In response, he releases the hostages, enraging her further. He announces that he would rather fail than succeed in this artless way. He declares that they are both a plague upon this earth, and thrusts his claws through his own throat.

As he lies dying, The Wolf warns Alec that he did this to them. Alec responds that they did it to themselves. He gave them lives, and they chose to live them this way. They were too focused on their past to see their present. He admits that he could put the Wolf back into the Green, and save him, allowing him to lie dormant with the other members of the Parliament until one day they might see redemption - but he won't.

In the meantime, Lady Weeds escapes to to the police cordon surrounding them, feigning victimhood. The police usher her into the back of an ambulance, but after killing the EMT inside, she discovers that she is trapped at the mercy of Capucine, who has caught up with her. She comments that she had loved just once in the last hundred years, and Lady Weeds took that from her. Lady Weeds reminds that the Avatar would never allow Capucine to kill her. Capucine admits that he would not - but she can do other things. Lady Weeds had always complained about how powerless she felt in her human body. Swiftly, Capucine snaps Lady Weeds' neck, leaving her alive, but paralyzed from the neck down. She would feel more powerless now.

As he stands over the Wolf's carcass, Alec is interrupted by a strange being who introduces itself in the plural as Calculus. It claims that there is a better way than this.

Retrieved from "https://heykidscomics.fandom.com/wiki/Swamp_Thing_Vol_5_34?oldid=1461739"
Community content is available under CC-BY-SA unless otherwise noted.