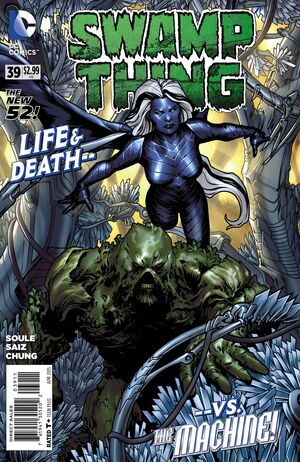 What the hell is going on? Something is very wrong here, Alec -- this entire swamp is rotting, and I'm not doing it.

In the swamps, Swamp Thing has been made sick by contact with the the walking, reanimated corpse that used to be his. This corrupted Alec Holland is the child of three kingdoms in Metal, Rot, and Grey. Lady Weeds, the Machine Queen reveals herself to Swamp Thing, and explains that she blames him for her having been paralyzed from the neck down when Capucine was meant to kill her, and now she intends to see him killed. She orders her child to eat swamp Thing, corrupting and rotting away at his body further. Before leaving him to die, she warns that everything that has happened to date is his fault. Weakly, Alec crawls to the grove of The Green, but is horrified to discover that it has been corrupted too.

Lady Weeds, meanwhile, returns to Servus, where Omega Calculus demands to know what use the Alec Holland corruption serves to The Rithm. She responds that he bested the Avatar of the Green in single combat - as none of the Calculi had been able to do. The Calculus reminds that the plan is to unify all kingdoms under machine control - including the Green - but she has poisoned it. Their goals are in conflict if she seeks destruction where they only seek efficiency. He insists that she should be removed as Avatar.

Back in the swamp, Abigail Arcane returns to her old home for the first time in ages, to find it in flaming ruins. When she sees that the grove has been poisoned, she begs Guarav for answers, but weakly, Alec warns that the old man can't hear her. When she discovers that all of the Green appears to be rotting - and it's not her doing - she complains that she needs to know what's going on. Her own Parliament of Decay is keeping secrets from her. Alec explains that her uncle Anton partnered with the machines. On the bright side, the fact that he's rotting means that they can touch each other again, for once. She tries to fix it, but her uncle has found some way to block her access to the Rot's power. Alec suggests that he knows someone who may be able to help them both. Soon, in a pub in Bolton, England, John Constantine receives an unexpected visit from the Avatars of Green and Rot together.

To Lady Weeds' surprise, the Omega Calculus simply asks her to give the power back to them in exchange for her life. A Caluclus, knowing that if she refuses, she will not give it up so easily, runs for cover. She responds by telling a story, explaining that when she taught the Avatar of the Green, she learned a great deal from him. What she learned from Alec was that if her Parliament challenged her power, she could take theirs. She drains the Calculi of their energy, and confronts the escaping A Calculus. It promises to serve her, but she will not trust its promises, and destroys it.

Alec explains the Machines' actions against the Green, and begs John's help. Reluctantly, John agrees to give a slight push of help, though he can't promise much in terms of his own effort. He passes Alec a pint of ale infused with the power of the Green - enough to give him back his body, but not to reconnect with the Green.

Together, he and Abby return to the grove, and he asks her to try to drain the rot from the grove's waters in the hopes that doing so will remove some of Anton Arcane's power, as both he and Miki of The Grey are down in the pool. She does what little she can, and he dives down into the Green, where Arcane is waiting. The old man gloats that whatever effort Abby makes to weaken him is nothing considering that Alec will still be dead within moments. Alec responds that Arcane is mistaken. He has secreted a source of power locked away within himself. He opens himself up, and a great green glow emanates from within. To Arcane's horror, the entire Parliament of Trees is released at last from their prison - and not happy to see what Alec has done in their absence.

Retrieved from "https://heykidscomics.fandom.com/wiki/Swamp_Thing_Vol_5_39?oldid=1461749"
Community content is available under CC-BY-SA unless otherwise noted.