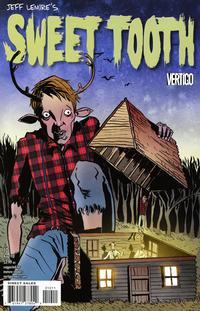 Appearing in "In Captivity Interlude: Backwoods"Edit

Synopsis for "In Captivity Interlude: Backwoods"Edit

Dr. Singh hypnotizes Gus into telling him about his past. He leads Gus into thinking about Gus' Father. Singh presses to learn more about him. He asks Gus if he performed any research or experiments to make Gus special. Gus replies he doesn't remember coming to the woods. He believes as he had always just been there. He never left the woods he reasserts.

Singh asks if he ever saw photos of his mother. He argues that Gus' mother never existed, and that's why he doesn't have a belly button from a traditional birth. He asks Gus to remember when he was an infant. He asks if he can remember what his dad worked on. Gus tells him it wasn't calculations for formulas, it was the Lord's writing. His dad was working on the Bible. He recalls his Dad reading from it about the good work of man poisoning the waters and killing all of the sinners.

Singh asks if he knows where his father kept the secret Bible and if he ever touched it. Gus says he did look inside and he saw a picture of his mom, and a map of Nebraska. Singh sends Gus back to the kennels and prepares to leave for Nebraska in the morning.

Retrieved from "https://heykidscomics.fandom.com/wiki/Sweet_Tooth_Vol_1_10?oldid=1461771"
Community content is available under CC-BY-SA unless otherwise noted.