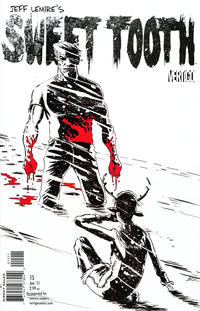 How it finishes I don't know. I am not the one to write the final page. A new prophet must emerge as well. A new voice in the darkness calling the boy home. Calling him back to where he came from. Calling him back to his cold womb in the white desert. But the boy must endure. He is God's final gift to this world. And he must survive at all costs.

Gus leads the part on their journey back to his house. He tells them that it is the best place in the world and safe from all of the world's issues.

Elsewhere, Jepperd hears Lucy scream in the woods. He rushes to her and finds several cultists are mounting her and attacking her. Glebhelm suddenly appears and has his dogs murder the men attacking Lucy. He makes an announcement that the same fate will befall all those who cross him.

At Nebraska State Wilderness Sanctuary, Abbot and Dr. Singh rip Gus' home apart. Singh reads the 'Bible' his father created over and over again. He starts to see a pattern that the Bible lists clues for someone to follow. He hones in on a line talking about burying the man he used to be. He orders his men to exhume the grave where Gus' mom was allegedly buried. The discover a tin box with an ID and picture inside. Singh reads through the Bible and finds it strangely prophetic of the events unfolding.

At The Preserve, the guards discover that the hybrids are gone and instantly know Johnny has helped them. They grab their rifles and head out to find them before their boss returns.

Retrieved from "https://heykidscomics.fandom.com/wiki/Sweet_Tooth_Vol_1_15?oldid=1461781"
Community content is available under CC-BY-SA unless otherwise noted.