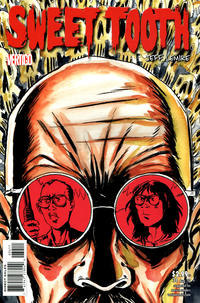 Appearing in "The Ballad of Johnny and Abbot"Edit

Synopsis for "The Ballad of Johnny and Abbot"Edit

Doug Abbot recalls growing up with an abusive father. Douglas tried to warn his brother, Johnny Abbot, that he wouldn't be around forever as he was planning to join the armed forces.

When the sickness struck the world, a teenage Johnny continued to take care of his father while his brother was off serving. His father sent him on an errand to retrieve more supplies from town. However, he was approached by several thugs who attempted to steal Johnny's scavenged supplies. Doug suddenly appeared and murdered several of the thugs which sent the rest running away. He told Johnny he came back for him and that he's heading to safe house in Nebraska. Johnny said he'd never leave their father. Doug replied that he has already murdered him to force Johnny to come with.

Upon arriving at the camp, Doug murdered the man in charge and claimed control of the camp. He kept others in line though everyone knew his weak spot was Johnny as he always came to protect him.

In the present, Doug gives Johnny an ultimatum to tell him where Gus and the others had run off to. Johnny refuses to tell him and Doug pulls the trigger on his handgun blowing a hole through Johnny's head. He turns to his wolf-boys to continue tracking them.

Retrieved from "https://heykidscomics.fandom.com/wiki/Sweet_Tooth_Vol_1_34?oldid=1614978"
Community content is available under CC-BY-SA unless otherwise noted.