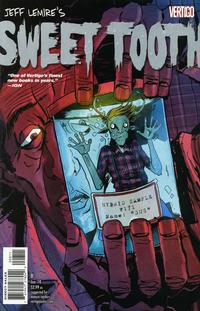 Jepperd and Louise discuss the rumors hybrid children. They don't understand why children born after the sickness appeared become hybrids.

In the present, Jepperd starts a fight with strangers to stop feeling the pain about losing Louise. The men stop pummeling him when they realize he isn't fighting back and leave him to rot in an alley.

Elsewhere, Gus has a vision of being chased by hunters. He encounters Dandy again. He wakes up and finds Dr. Singh waiting for him. Singh asks him about his father. Gus resists telling him any thing as he feels he is a bad man. Singh explains Gus is special. He lifts up his shirt to show him he has no belly button.

Retrieved from "https://heykidscomics.fandom.com/wiki/Sweet_Tooth_Vol_1_8?oldid=1461767"
Community content is available under CC-BY-SA unless otherwise noted.