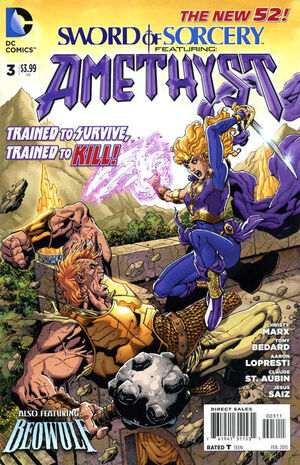 Wiglaf and Beowulf are confused by the suggestion that this sorceress they have found is both Beowulf's mother and Grendel's. Beowulf, though, is content to destroy her rather than know the truth. Still they listen as she explains his true nature.

Beowulf is the last remaining super-soldier from an initiative conceived by Basilisk and its leader Regulus. Basilisk had seen the threat of metahumans and aliens growing on earth, and had schemed to empower average humans. The Sorceress' work descends from the work of Amanda Waller and her Samsara Project. Unfortunately, the clash between humans and metahumans ended with the end of their world. Still, their legacies live on in Beowulf, and in her, and in Grendel.

Watching the exchange with growing annoyance, Wiglaf reminds Beowulf of the mission to help king Hrothgar rid his kingdom of the scourage the Grendel had been. In anger, he launches his spear at the woman, succeeding in piercing her shoulder only by dint of Beowulf's hesitation in striking with his sword. The Grendel sees its mother injured, and becomes enraged.

As Beowulf fights the Grendel back, the woman warns Wiglaf that he has robbed his friend of his birthright this day. She hammers her fist down on a button which causes the entire facility in which they stood to collapse into the sea.

Some hours later, Beowulf returns to Hrothgar's home with Wiglaf in his arms, declaring that the Grendel is dead - and they have Wiglaf to thank for it. Jealous, Unferth doubts that the Grendel is dead, and wonders at how Wiglaf could be responsible for their safety. Sliding out of Beowulf's arms, Wiglaf decides to answer Unferth himself, by way of thrusting his heel into Unferth's groin, prompting Hrothgar and the Housecarls to hail he and Beowulf as heroes.

Retrieved from "https://heykidscomics.fandom.com/wiki/Sword_of_Sorcery_Vol_2_3?oldid=1660875"
Community content is available under CC-BY-SA unless otherwise noted.