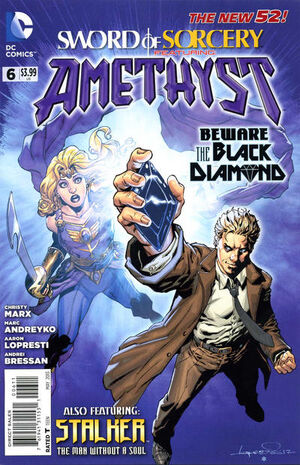 After unwittingly chasing down his own descendant, Clarissa Rowe, for the devil in exchange for his soul, Stalker has now realized their relation, and the fact that she has only just given birth to a son. Now, the devil demands to be given that newborn, and Stalker refuses.

In order to fight more ably, Stalker gives the child to Clarissa's arms, and throws all the magic he can at Lucifer. Unfortunately, they are still cornered, and he urges the girl to make a run for it. Further to his misfortune, Clarissa has died in the interim. Spotting a gun near her hand, Stalker feigns defeat, and promises to give up the child as he bends down to pick up the weapon instead. Grabbing it and the baby up, Stalker rains a hail of bullets on Lucifer and his demons, making a run for it.

Using up some of the last of his magic power, Stalker opens several portals, and enters just one of them, breaking into a nearby grocery store on the other side and stealing what supplies the two of them will need. Next, he knocks on the door of a rectory, seeking out the priest who lives there. Dragging the man of god to a church, he empties out cans of kosher salt into a circle of protection, awaiting the arrival of Lucifer.

Retrieved from "https://heykidscomics.fandom.com/wiki/Sword_of_Sorcery_Vol_2_6?oldid=1660878"
Community content is available under CC-BY-SA unless otherwise noted.