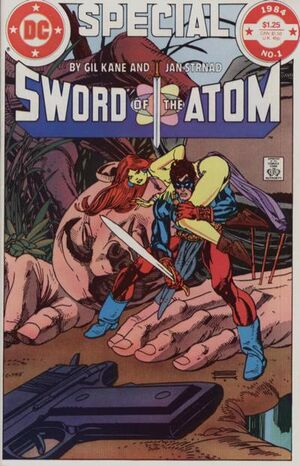 Appearing in "The Atom's Farewell"Edit

Synopsis for "The Atom's Farewell"Edit

A book entitled The Atom's Farewell has just been published and all of Ivy Town is hooked on it. Chapter One summarizes Jean and Ray's relationship, how Ray's superheroics preoccupied him and how she inevitably fell into the arms of her new partner, Paul Hoben. Ray's discovery of her affair led to his taking an expedition to the Amazon Jungle.

Chapter Six involves the battle of Morlaidh from the previous miniseries.

Chapter Eight discusses how the aliens' spaceship engine, which utilized white dwarf star matter (the same material Atom's powers derive from), causes Ray to return to his normal height. He lost conciousness and awoke in civilization. He reunited with Jean and decided to investigate the problems with his size control powers. Believing the belt may be the problem, Ray uses his original device but experiences the same pain and blacks out. He awakens nearly an hour later, shortly before the timer is set to activate the reverse beam. Battling his cat in the process, Ray manages to reach the beam and returns to his normal size, again accompanied by pain and a black out. He awakens almost two and half hours later, late for dinner with Jean, who spurns him and focuses her attention on Paul. All ignore Paul's date who leaves in mid-dinner. Jean and Ray drive to the Overlook and discuss their feelings for each other and their respective new loves (Paul and Laethwen). Ray reminisces on how he met Laewthwen and the couple agree they should move on with their lives.

Chapter Ten tells the story of how Ray and author, Normal Brawler, return to the Amazon jungle in search of Laethwen and her tribe. Norman finances the trip with the money from his book advance. Because the spaceship had used white dwarf star radiation, Ray intends to search for radiation signals. Eventually they find a signal and follow it into a camp run by cocaine smugglers. The smugglers capture the two men and tie them up. Ray has no choice but to turn into the Atom which knocks him out. Norman manages to hide Ray's unconscious body. The smugglers later return to find that Ray is missing and decide to execute Norman. Ray comes to the rescue. They find some gasoline drums and set the camp on fire. All the smugglers flee except the leader who is taken down by miniature poison arrows. Realizing the aliens are nearby, Ray bids Norman farewell and leaves to live with Laethwen and her tribe. Norman returns and finishes his book.

Retrieved from "https://heykidscomics.fandom.com/wiki/Sword_of_the_Atom_Special_Vol_1_1?oldid=1510579"
Community content is available under CC-BY-SA unless otherwise noted.