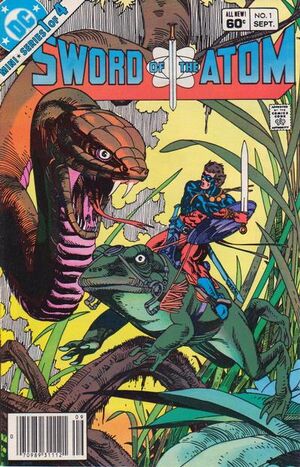 Ray Palmer discovers his wife Jean cheating on him with her new legal partner, Paul Hoban. Hurt, he takes a trip to the Amazon jungle in search of a white dwarf star fragment, but is attacked by the pilots of his charter plane, who are cocaine smugglers. He becomes the Atom to fight back, but the plane crashes and both smugglers die. The Atom discovers his size-and-weight controls have been short-circuited, stranding him at six-inch height in the jungle. He encounters a tribe of tiny yellow-skinned people, including Princess Laethwen and rebel leader Taren, both of them citizens of the hidden city of Morlaidh. Atom and Taren are taken prisoner, though the Atom attempts to fight back. Meanwhile, in Ivy Town, Jean Loring hears that her husband’s wedding band has been discovered in the plane wreckage in Brazil and mistakenly assumes Ray Palmer is dead.

Retrieved from "https://heykidscomics.fandom.com/wiki/Sword_of_the_Atom_Vol_1_1?oldid=1460358"
Community content is available under CC-BY-SA unless otherwise noted.