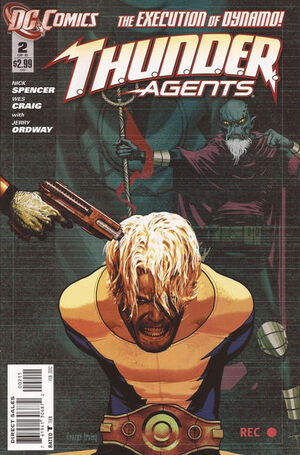 Solicitation from DCComics.com: It's the return of Warlord and his underground race, the Subterraneans! For too long their voices have gone unheard, their claims of mistreatment by T.H.U.N.D.E.R. and the people of the surface world ignored! Today, they send a message to those who have done them wrong – by executing Dynamo! Plus, in a special sequence drawn by the legendary Jerry Ordway, learn about the man who built the devices that power the T.H.U.N.D.E.R. Agents – and more about the mysterious super-computer known as Daniel.

Retrieved from "https://heykidscomics.fandom.com/wiki/T.H.U.N.D.E.R._Agents_Vol_4_2?oldid=1474834"
Community content is available under CC-BY-SA unless otherwise noted.