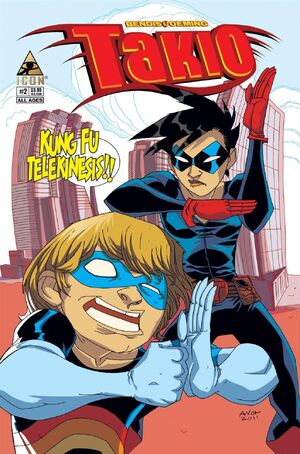 From the writer that brought you ULTIMATE SPIDER-MAN comes a new chapter in the new all-ages, creator-owned extravaganza TAKIO! TAKIO is about two sisters who are the only superheroes in the world — or at least they’re trying to be — but the realities of super powers while dealing with each other are driving them both crazy. It’s new superheroes for a new generation.

Retrieved from "https://heykidscomics.fandom.com/wiki/Takio_Vol_1_2?oldid=1475153"
Community content is available under CC-BY-SA unless otherwise noted.