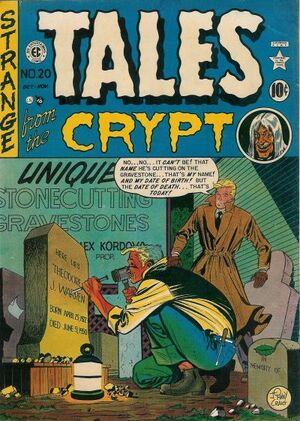 Appearing in "The Thing from the Sea"Edit

Synopsis for "The Thing from the Sea"Edit

1 of 4
Add photo
During a sea voyage a passenger discovers that stateroom 13 has the reputation of being haunted. He discovers that it is indeed haunted by the corpse of someone the captain murdered and it drops into sea after taking revenge upon the captain.

Appearing in "A Fatal Caper"Edit

Synopsis for "A Fatal Caper"Edit

Teenagers remove a body from a casket in order to dress as a mystically-summoned monster and place one of their own inside as a prank, however, the undertaker is unaware of this and buries the body. When they tell him that he must dig it back up, he refuses because the corpse inside died of leprosy. They all look down in horror at their hands and realize they must have contracted it.

A sister worries that her brother is under too much stress and so asks a doctor to write a prescription for some medicine. The doctor does so, but the old-fashioned druggist has only a bottle with the correct label, but after the doctor examines it, he realizes it is not the correct substance. After the contents have been analyzed, the results indicate that for the past several weeks, her brother has been slowly digested alive.

An artist draws a frightened face with a circle around it. Thinking this odd, he goes for a walk and comes upon a grave-stone cutter who looks like the picture he drew carving a tombstone with his name on it. The stone-cutter laughs it off as coincidence but wants to show his wife the picture. It turns out the artist and the stone-cutter's wife were once romantically involved and she wants to be so again. The stone-cutter catches them in a passionate embrace and caves in the artist's head with a mallet. The end of the story shows the reader looking at the stone-cutter's frightened face through the open circle of rope at the end of the hangman's noose.

Retrieved from "https://heykidscomics.fandom.com/wiki/Tales_from_the_Crypt_Vol_1_20?oldid=109565"
Community content is available under CC-BY-SA unless otherwise noted.