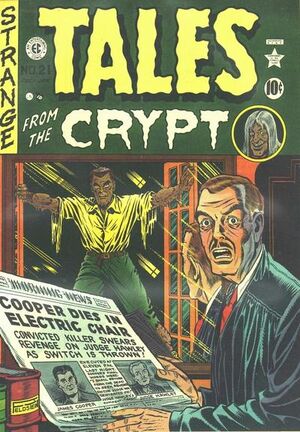 Appearing in "A Shocking Way to Die"Edit

Synopsis for "A Shocking Way to Die"Edit

1 of 4
Add photo
A scientist revives a man sent to the electric chair who then pursues revenge against the jury and judge that convicted him.

A lunatic owner of a 'tunnel of love' ride replaces the wax figures in his lurid displays of violence with the more realistic-looking bodies of his victims so his customers will no longer laugh at the exhibits of his genius.

Appearing in "House of Horror"Edit

Synopsis for "House of Horror"Edit

Three college freshmen disappear one night as part of a frat hazing at a local haunted house.

The rivalry between two college boys for the love a woman ends when the poorer of the two murders the other, making it look like an accident, to gain his wife and money. To top off his victory he decides to steal the tuxedo for the wedding the victim was wearing when buried, because he is convinced if he were not too poor to afford a tuxedo in college, he could have been her first choice in marriage. She agrees to the wedding, but on the blessed day, he dies from embalming fluid poisoning contracted from the suit.

Retrieved from "https://heykidscomics.fandom.com/wiki/Tales_from_the_Crypt_Vol_1_21?oldid=109566"
Community content is available under CC-BY-SA unless otherwise noted.