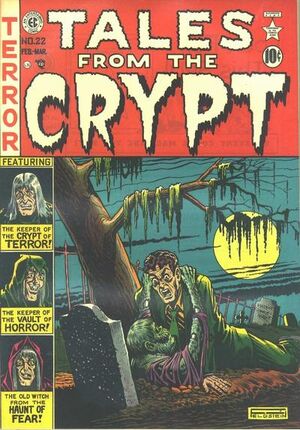 Appearing in "The Thing from the Grave"Edit

Synopsis for "The Thing from the Grave"Edit

1 of 8
Add photo
Bill and Jim are rivals for Laura's affection. Jim proposes and Laura accepts, but she worries about Bill's temper. Bill doesn't like to lose, so he kills Jim and buries his body in the forest and disposes of his car in a sinkhole. He tries to convince Laura that Jim has deserted her, but she refuses to believe it as Jim had told her that if she were ever in trouble, he promised her no matter what, he would help her. Bill gets frustrated and admits to murdering Jim and tells Laura that he'll have to kill her too. He takes her to a cabin in the woods near where he buried Jim, locks her in, and sets fire to it. Her screams literally wake the dead. Jim's corpse pushes free from its grave and after Laura has passed out, walks unfeeling through the flames to pull her out of the burning cabin. After he sets her down safely, he shambles after the hysterical Bill. Bill trips into the unearthed grave, and Jim's corpse pins him down while re-burying the both of them.

1 of 3
Add photo
An auto accident forces a man to seek help for his wife who has been knocked unconscious. When he returns with a doctor the doctor is surprised to see she has suffered few cuts but nonetheless is nearly dead from massive blood loss. Neither man is the correct blood type to give a transfusion, however, a passing stranger with the correct type offers to do so. The woman recovers and disappears after which a spate of vampire attacks occur. The man realizes these attacks have all occurred in the area of the auto accident and takes some stakes out there to finish the vampire. He attacks a fiend but realizes to his dismay that it was his wife. He is confronted by the stranger who gave the transfusion who admits he is the vampire who 'turned' his wife. At first, he says, she was merely going to be his victim, but he became enamored of her beauty and wished she to become as he was which is why he provided his blood to use in the transfusion. 'But now that you have deprived me of my consort, you must become my victim!'

Two unscrupulous amusement park owners offer a third partnership to a man who claims he has plans for the world's fastest roller coaster. After it's built, they grouse about having to cut him in on the profits, so they shove him in front of the car during a final test and hush the whole thing up as an 'unfortunate accident'. On opening day, before packed crowds, they get into the car for the first ride, only to be found dead as the car comes to a stop, their necks broken.

Appearing in "The Curse of the Arnold Clan!"Edit

Synopsis for "The Curse of the Arnold Clan!"Edit

A man finds a an old book in the attic which details a curse which stipulates every 50 years the eldest Arnold will be buried alive. He doesn't believe it, but when he attends a costume ball that entails a scavenger hunt he is tasked with retrieving a musket and realizes that one is interred within a coffin in the family crypt. He attempts to sneak in to avoid the caretaker, but then sees him coming and so hides in the casket. The lid locks tight and the curse of the Arnold Clan is fulfilled once again.

Retrieved from "https://heykidscomics.fandom.com/wiki/Tales_from_the_Crypt_Vol_1_22?oldid=109567"
Community content is available under CC-BY-SA unless otherwise noted.