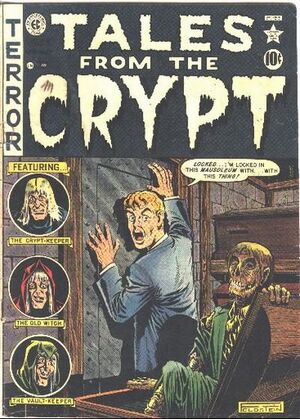 Appearing in "Reflection of Death!"Edit

Synopsis for "Reflection of Death!"Edit

1 of 8
Add photo
You are driving home one evening with your friend Carl when suddenly an oncoming car swerves into your lane. Everything is blackness until you slowly come to staring up at the side of the road. You flag down on on-coming car. The man looks at you, screams hysterically, and floors it. You make your way along the road until you spot a hobo on the underside of the bridge. As you draw closer, the man gets a good look at you and flees in terror. You notice a newspaper at your feet dated two months from the date you think that it should be. You flag down a woman driving another car. She gets a good look at you and faints dead away. You push her to the side and drive home. It has been condemned. You drive to friend Carl's place. Carl does not scream when he opens the door. 'Yes? Can I help you?' 'Carl, it's me, Al! Don't you recognize me?' 'I don't know what kind of prank you are pulling, but two months ago Al and I were in an auto accident which horribly mangled and killed Al and left me completely blind.' Stunned, you wander into the bathroom and scream as you gaze into the mirror beholding the rotting flesh as it falls off your protruding skull. Carl shakes you roughly as you scream. 'Al, what is it?' you hear as you realize you had been dreaming in the passenger seat. 'Just a horrible nightmare, Carl'. 'We'll be back soon.' You see faint headlights approaching from the distance. Suddenly, they swerve towards you, and this time, you know it's no dream...

A man gets locked inside a mausoleum and survives nearly a month by catching leaking rain water and devouring the corpse, but succumbs to formaldehyde poisoning.

1 of 2
Add photo
Alan Bitsby sets out to prove that a medium is faking by asking him to raise the spirit of his 'departed' wife. Unbeknown to the medium at the time the seance begins, Bitsby's wife is very much alive. The medium goes into a trance and, with a great deal of effort, does succeed in summoning up the spirit of Bitsby's wife, to which he triumphantly accuses the bewildered medium of being a fake and leaves. Upon returning home, however, Mrs. Bitsby is found dead as a doornail.

Jay and Bill witness a forbidden voodoo ceremony and Jay is captured while Bill escapes. Jay later meets up with Bill and they leave Haiti. Bill finds a package at his doorstep and when he opens it is startled to see it contains voodoo doll wielding a large pin. It comes to life and attacks Bill. He throws the thing into the fire and rushes into the hall to call Jay. He returns to the fireplace and sees that the doll is nowhere in sight. Jay mocks Bill's hysteria and reveals that he is a zombie sent with the doll to kill Bill. The doll drops down on Bill and jabs him with the pin. At first, Bill is relieved that the doll has gone limp and only barely scratched him, but Jay explains that the pin was poisoned and he has only moments to live. Enraged, Bill rips apart the voodoo doll and is horrified to see that it contains a human heart. Jay gasps out that that was how the natives managed to animate the doll by cutting out his heart, as both Jay and Bill fall down dead.

"Reflection of Death" shows a strong influence from "The Outsider" by H.P. Lovecraft.

Retrieved from "https://heykidscomics.fandom.com/wiki/Tales_from_the_Crypt_Vol_1_23?oldid=109568"
Community content is available under CC-BY-SA unless otherwise noted.