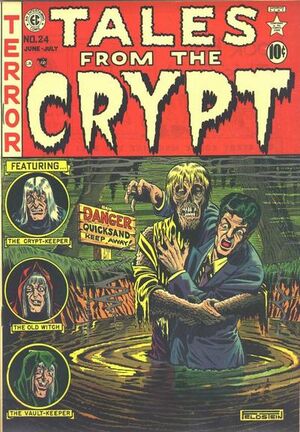 Appearing in "Bats in My Belfry"Edit

Synopsis for "Bats in My Belfry"Edit

1 of 3
Add photo
An actor loses his hearing so he goes to visit an unorthodox individual that a friend tipped him off to. This person recommends transplanting the auditory senses of a bat to which our luckless hero agrees. Not only does he receive super acute hearing, but he starts to gain other characteristics of a bat. Unfortunately, it is only later that he realizes it was actually a vampire bat...

Appearing in "The Living Death"Edit

Synopsis for "The Living Death"Edit

A man is dead for nearly three months, but prevented from decaying by post hypnotic suggestion until he hears the key word 'Laurie'. When he hears this word, he instantly dissolves into a bag of putrescent slime.

1 of 6
Add photo
Duncan is reading horror stories when suddenly he decides he wants something to eat. The next thing he knows, he's outside of a restaurant on the street but he doesn't remember how he got there. He enters the restaurant thinking he'll get something to eat but the smell of the cooked meat makes him nauseous. He leaves the restaurant and finds himself outside of a cemetery, again not remembering how he got there and why he is carrying a shovel. He begins to look among the graves for something particular, and when he finds a fresh one, he knows what he must do. He begins digging. When he finds himself lifting the corpse's arm to his mouth, he begs himself not to go through with it. He passes out, and when he comes to, stares in horror at the partially devoured corpse. He hears people approaching, and determined not to let them take his food, he slings the corpse over his shoulders and begins to run in the opposite direction. He trips, and strikes his head upon a gravestone. When he regains his senses again, he is sitting back in his apartment. He thinks to himself what a horrible dream and that is the last time I will read horror stories before bed. Duncan walks into the kitchen where he notices that oddly the refrigerator shelves have been piled onto the counter. When he opens the refrigerator, the partially devoured corpse tumbles out.

Appearing in "Scared to Death!"Edit

Synopsis for "Scared to Death!"Edit

A man weds a woman to secure her uncle's fortune when he dies, but gets tired of waiting so convinces his wife to be an accomplice to her uncle's murder. The guilt eats away at her and he quickly tires of her moroseness so he hatches another scheme to do away with her and keep the money for himself. He begins to plant the idea in her mind that her uncle will seek vengeance from beyond the grave in order to scare her weak heart into giving out. Eventually he succeeds when he says 'Did you hear that? Your uncle's out on the landing!' 'Yes, I heard that!' she cries, as her heart gives out and she dies. Unfortunately for him, her uncle's corpse actually IS outside on the landing, enters the room, and drags him out into the bog.

Retrieved from "https://heykidscomics.fandom.com/wiki/Tales_from_the_Crypt_Vol_1_24?oldid=109569"
Community content is available under CC-BY-SA unless otherwise noted.