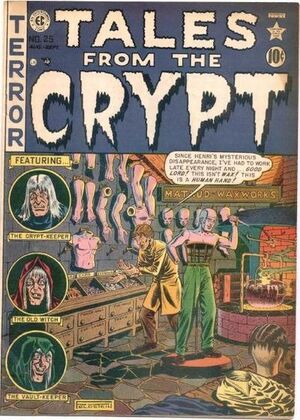 1 of 4
Add photo
A sportshunter who is only interested in game for the trophy ends up the victim of a lunatic who thinks the same way about humans.

Appearing in "Judy, You're Not Yourself Today!"Edit

Synopsis for "Judy, You're Not Yourself Today!"Edit

An old crone utters a magical spell that causes her to switch bodies with a man's young wife. He tricks her into switching back by convincing her the body she has usurped is terminal with cancer. Then, he shoots the crone, and buries her in the cellar.

Appearing in "Loved to Death"Edit

Synopsis for "Loved to Death"Edit

A rejected young man buys a love potion that works a bit too well.

Henri and Marie are the owners of a wax museum where, after the show hours, Marie claims that the wax figures in the chamber of horrors tell her that they are being tortured and so she averts their eyes from their victims and lowers their weapons. This infuriates Henri who thinks his wife is losing her mind and damaging his most valuable property. Henri is a violent man and threatens his wife with death should she touch the statures again. When he awakes that evening, he goes to the exhibit floor where he finds Marie has altered the chamber of horrors to a scene more resembling a joyful party. True to his word, Henri strangles Marie. The wax figures begin to move and advance upon Henri. The next morning, when the public arrives to view the exhibit, they find that Henri has been made into a large candle for Marie's funeral display.

Retrieved from "https://heykidscomics.fandom.com/wiki/Tales_from_the_Crypt_Vol_1_25?oldid=109570"
Community content is available under CC-BY-SA unless otherwise noted.