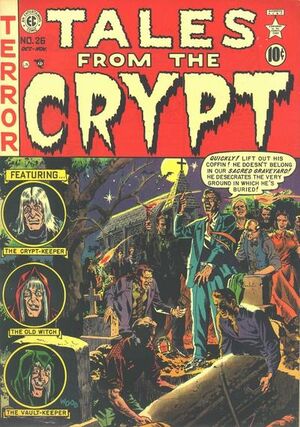 Appearing in "Drawn and Quartered!"Edit

Synopsis for "Drawn and Quartered!"Edit

1 of 4
Add photo
An artist in Haiti realizes that he has been cheated by several people in the art industry and so seeks out native voodoo practitioners for vengeance. They grant him the ability to paint pictures with the property of voodoo dolls, so that what happens to the painting happens to its subject. Unfortunately he realizes that he has painted a self-portrait and so he must take care to keep it safe. At first, he locks it in a safe, but when he becomes short of breath he realizes that the safe is air tight, so he moves his self-portrait into the loft under the skylight. He draws a picture of his landlord and erases his legs. The landlord screams outside as he is driven over by a car and a bystander observes that his legs will have to be amputated. He draws a picture of an art critic and erases the eyes. Across town, the art critic's wife throws acid into his face in a jealous rage. He portrays another victim without hands whose hands are lopped off in a cutting machine. He decides to go see the art dealer who bought all his paintings for very little money and heads down to the subway, while a painter working above the skylight carelessly kicks a can of turpentine off the board and it comes crashing through the skylight horribly distorting the paints as our luckless protagonist finds himself thrown under the subway train to resemble the way his self-portrait now looks.

Appearing in "The Borrowed Body!"Edit

Synopsis for "The Borrowed Body!"Edit

A woman and her lover plot to murder the wife's husband. The lover's intention to ambush him in an alleyway goes awry when the husband runs across the street after being attacked and the lover runs after him only to be struck by a car suffering terminal injuries. While he is being taken to the hospital, the husband returns to confront the wife having realized she set him up. At first she is shocked her husband hasn't been killed, but then rallies determined to finish the job herself. At the exact moment she strikes her husband with the poker she seized, her lover dies in the hospital room. But instead of remaining dead, the soul of her husband finds itself transplanted into the lover's body and he leaves the hospital in order in confront his wife once again.

Roy Madison buys a farm from Hiram Becker with the intent of leveling it and turning the property into a flight school, however there is an Indian burial mound located on the property which Hiram warns Roy not to bulldoze. Roy scoffs at such superstition and proceeds to drive the bulldozer into the mound. After unearthing some skulls, the bulldozer conks out and it begins to rain. Later that evening, after hearing some weird sounding drums, Roy goes to open his door and screams in terror. The following morning Hiram finds Roy's lifeless body, scalped.

A political rival for the office of mayor poisons the current mayor and leaves a suicide note confessing graft and corruption on the table in order to smear the mayor's past reputation and cement his victory in the election. However, a stray wind blows the note off the table underneath a bookcase. When the current mayor is found dead, an autopsy is performed and the whole town knows the mayor had been poisoned, but at the lavish funeral he wonders why no one found the note. Eventually the note does turn up after he wins the election, and he whips up so much ill will toward the previous mayor that they exhume his body from the graveyard and dump it out at sea. One day, while the mayor is out at sea fishing in a rowboat, a storm blows up suddenly. He attempts to bring up anchor, but it appears to be stuck on something. He peers over the side of the rowboat, and the hand of his victim's corpse thrusts out and pulls him into the depths.

Retrieved from "https://heykidscomics.fandom.com/wiki/Tales_from_the_Crypt_Vol_1_26?oldid=109571"
Community content is available under CC-BY-SA unless otherwise noted.