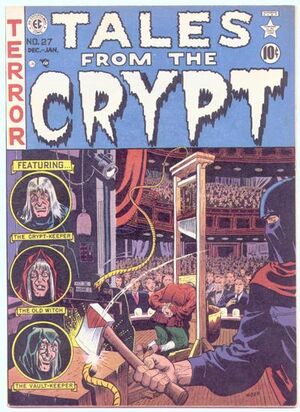 1 of 4
Add photo
Two American producers want to bring Parisian style Grand Guignol gory plays to Broadway theater but the owner refuses to do business with them. They shoot him and take make-up secrets manuscript, but he returns from the dead and gets his revenge by swapping out the stage prop acid and red-hot stove with the real things.

A woman raises her daughter to hate men and so for six years she murders a husband a year, making each appear an accidental death, as trophies for her departed mother. The seventh victim is not quite dead when he drags himself from the airplane wreck she caused, and thus she has to finish the job off herself with a large rock. When he is interred with the other six dead men that are ignorant they've been murdered "the wind...comes up...seems to sound like a whisper...telling the others..." When she is alone in the cemetery the corpses rise and drag her down into the earth with them.

A woman ends up getting pregnant by her husband's ghost!

A member of the French nobility during the Terror betrays his fellow's confidence in order to curry favor with the revolutionary government. The servant of his latest duped victim demonstrates to him in the market how chickens can live with their heads cut off for quite some time and suggests that perhaps the same may be true of humans. He laughs this off as the servant merely attempting to frighten him, but later that evening, the servant does indeed guide the headless body of his former master to acquire vengeance.

Retrieved from "https://heykidscomics.fandom.com/wiki/Tales_from_the_Crypt_Vol_1_27?oldid=109572"
Community content is available under CC-BY-SA unless otherwise noted.