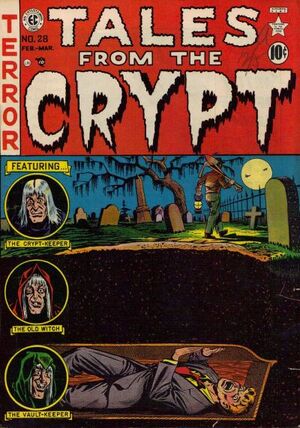 Appearing in "Bargain in Death!"Edit

Synopsis for "Bargain in Death!"Edit

Two medical students need to procure a corpse in order to get an anatomy credit to graduate and pay an imbecile five bucks to dig and grave rob a newly dug grave. The target of their efforts is a man convinced by his 'friend' to take a drug that will emulate the death-like appearance in order to collect a forty thousand dollar insurance policy. The friend tells him that he will insist upon his being buried immediately and then dig him up later, but he intends to betray him and leave him in the coffin. When the medical students and their stooge finish unearthing the casket, the unfortunate man's air is nearly gone, and he sits bolt upright as soon the lid is lifted, nearly scaring the three of them to death. The students rush out of the cemetery in a panic just as the 'friend' is driving down the road. He swerves to avoid them and crashes the car, killing himself. Later, the students receive a visit from the imbecile who has brained the entombed man with a crowbar in order to collect the five bucks.

Appearing in "Ants in Her Trance!"Edit

Synopsis for "Ants in Her Trance!"Edit

A hypnotist places his wife in a trance and commands her to stop her heart. He brings her out of it with the phrase 'snap out of it'. When he falls for another woman, they decide to murder the wife by using the words 'wake up' instead, which won't bring her out of the trance. After she has been dead and buried for a year he brings his lover to the gravesite for appearances sake. She becomes hysterically overcome with guilt and he uses the phrase 'snap out of it'. They had back toward the cemetery entrance, but the grave erupts open and the corpse of his former wife lurches towards them. She hypnotizes them both and inflicts the same heart failure on them.

An elderly man is fired due to age discrimination and returns to Haiti to work revenge upon his boss. He asks a voodoo practitioner for a tree that will grow in reverse while sympathetically affecting the same change in his former boss, and it works. The trees ends up as an acorn and the boss de-ages all the way past infancy to ?

Appearing in "The Ventriloquist's Dummy"Edit

Synopsis for "The Ventriloquist's Dummy"Edit

A man with a homicidal head growing out of his wrist pursues the career path of a ventriloquist.

Retrieved from "https://heykidscomics.fandom.com/wiki/Tales_from_the_Crypt_Vol_1_28?oldid=109573"
Community content is available under CC-BY-SA unless otherwise noted.