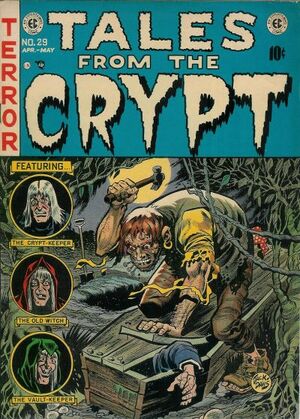 1 of 3
Add photo
A young boy's bullying butcher step-father locks him in the closet as punishments. At first he is frighted, but meets a friend named Hozir who lives in the closet and wants to give the step-father what he deserves, but the boy restrains him. Hozir compromises on his suggestions for the step-father and the boy agrees to first, let Hozir push the step-father over, and after the step-father increases his aggression toward the boy, cut off the tip of his finger. One day, when the mother is away at a movie, the step-father takes the opportunity to strike the boy despite his plea 'please don't hit me daddy, Hozir won't like it.' Hozir refuses to heed the boy's pleas for mercy and feeds the step-father through the butcher shop meat grinder.

Appearing in "A Rottin' Trick!"Edit

Synopsis for "A Rottin' Trick!"Edit

A man uses a girl then dumps her and makes the mistake of seeking the help of a boat pilot to leave the country who used to love her before she killed herself. The boat pilot drops him off at an island that serves as a leper colony.

Appearing in "Board to Death!"Edit

Synopsis for "Board to Death!"Edit

A woman with a fear of enclosed spaces due to being trapped in a cave-in as a child is driven insane when her cruel husband repeatedly threatens to bury her alive, then finally strikes her, and they have to airlift her to the hospital in a pine box attached to the small plane. Even after the lid is opened, all she sees is the blackness in her mind.

Appearing in "A Sucker for a Spider!"Edit

Synopsis for "A Sucker for a Spider!"Edit

An embezzling banker who keeps spiders for a hobby is blackmailed by his chief teller who is aware of the embezzlement. The banker invites the teller to stay the night and aggravates a black widow before dropping it beneath the sleeping teller's bed sheets. In the morning, with the teller dead, the banker decides to fly a small plane down to Florida to get out of town for awhile, but the engine conks out over the swamp. He bails out, but when he cuts himself out of his chute, he drops into the web of a giant spider that proceeds to paralyze him and suck him dry.

Retrieved from "https://heykidscomics.fandom.com/wiki/Tales_from_the_Crypt_Vol_1_29?oldid=109574"
Community content is available under CC-BY-SA unless otherwise noted.