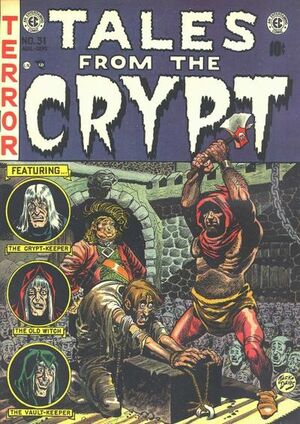 Two men aboard a cruise are bored until they get the idea to build a rat trap and ask the captain to have a barrel built with a platform in the middle of it and a run off down the center. They fill it with water and attach a teeter to the rim with some food attached to the end of it so that when a rat attempts to get it, it falls into the water and swims to the platform. When another rat approaches and falls into the drink, they bet on which rat will survive the bloody struggle for the platform. The captain is put off by this behavior and opines that human beings in the same situation would act the same way. The two men scoff and claim that civilized people would never behave in such a fashion. Their ship loses lifeboats in choppy waters and then the crew is forced to abandon ship and they learn that human beings do indeed act in the same fashion in the same circumstances.

Appearing in "The Thing in the 'Glades!"Edit

Synopsis for "The Thing in the 'Glades!"Edit

A man's wife dies in childbirth giving him a deformed retarded son with stunted legs. He becomes a hermit with a cabin in the Glades so no one will know and raises the boy as best he can. When four people are ripped apart and a witness sees the hugely muscled-upper body creature enter the cabin, the sheriff confronts him. He brandishes a shotgun and claims the boy doesn't know what he's doing, so the police back off, but then the man bursts into the clearing with one of his arms torn off and admits to the sheriff he was wrong and that his son is a killer. When he dies, the son attacks the sheriff and his men and bullets don't seem effective, so the sheriff leads it into the bog where it gets caught and sinks.

Bill Gaines and Al Feldstein are smoking a hookah made out of a skull as they tell this auto-biographical tale of hiring Jack Kamen to draw horror stories. They have to tell Jack that his work is too sweet and charming now that mood has changed from love comics that were only selling two percent of copies to horror comics where all three titles made them ten dollars each making them rich. They advise Jack to get into the swing of things like Ingels, Craig and Davis who are all drawn by their respective artists shown torturing effigies of Bill Gaines. Jack resolves to become more horrible and doses off at the drawing board and dreams of committing murder under the full moon and returning menacingly to his wife and two small children. His wife wakes him up with a scream when she spies a mouse.

In 1667 Germany a fat Duke lords it over his starving peasants. When the Duke imposes a tax on the peasants for "dirtying his carriage" with the blood of a young child he rode down in the street, a man conceives the plot of stealing some of the Duke's jewels in order to pay the tax. A friend offers to go in his stead, because he has no family. The friend is caught, and the Duke orders the man's hands severed. This infuriates the man whose idea it was and he rushes the platform brandishing a knife, threatening to kill the Duke if the guards interfere. He proceeds to make the Duke swallow all the jewelry he is wearing, turning him into a human pinata, and throws him into the crowd.