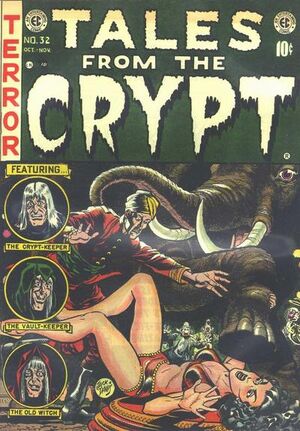 1 of 4
Add photo
A butcher during the war gets around rationing points by selling steak to the wealthy customers who will pay cash for it and horsemeat, then stale meat and finally tainted meat to everyone else. His wife learns of his scheme, but he refuses to be talked out of it. When several people in town die of food poisoning, the butcher intends to leave town, but his wife becomes hysterical when she realizes her husband has sold tainted meat to the family that her little boy is having dinner with right now. The boy comes home ill and expires. The wife seizes a carving knife and advances upon her husband. The next day, she glassy-eyed offers the customers "tainted meat? tainted meat anyone?" at the meat display counter where her husband's body has been neatly chopped into serving portions.

Three business partners in construction make a patsy out of a fourth to take the blame for shoddy construction of a hospital that collapses and kills twenty-one patients. They take a flight in a small plane out in South America and, when trying to fly through a gap between two mountains at night, become snagged by cables. When the dawn arrives, they realize that their plane has become stuck in a giant spider's web.

Two gamblers hate each other so much they challenge themselves to a game of chop poker. Chop poker is like strip poker, although instead of removing an article of clothing, they use a meat cleaver to remove a digit or limb. They have their personal doctors act as seconds during their bizarre duel to the finish, but the gamblers find themselves unable to proceed when they've both hacked each others arms and legs off.

An elephant trainer whose performance entails having the animal raise its foot an inch above his beautiful wife-assistant's face is having an affair with a woman who convinces him to have the elephant crush the wife and have the elephant shot blaming the death on the elephant. He does so, and marries the lover and trains a new elephant. A year later they return to the same town where the murder was conducted and the dead woman and beast rise from the grave to seek their revenge.

Retrieved from "https://heykidscomics.fandom.com/wiki/Tales_from_the_Crypt_Vol_1_32?oldid=109577"
Community content is available under CC-BY-SA unless otherwise noted.