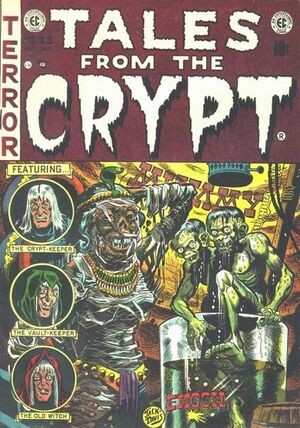 The Crypt Keeper relates his origin story of the meeting between his parents, a 4000 year old female Egyptian mummy and a two-headed corpse.

A magician and his wife are visiting India looking for new acts to perform when he spies a girl with a trick rope that rises into the air when she plays a pipe and can be climbed upon. He offers to buy the rope from her but she refuses. His wife invites her back to the hotel room where the two plot to kill her and steal the rope. He strangles the girl and the rope still rises into the air when the pipe is played. His wife climbs the rope but disappears at the top of it, and moments later, the dismembered parts of her corpse fall from the air. The unattached rope wraps itself around the man's neck and holds him swaying off the ground.

In this grim fairy tale, a young prince grows fond of his nanny until one day she appears dead. The king attempts to console his heart-broken son by offering him candy, cake and a pony at the funeral for his nanny. The boy peeks in on her as she is lying in state and sees her move. It turns out she suffers from cataleptic fits and reassures the prince that she will never leave him. The boy thinks of all the nice things that he won't be getting due to the cancellation of the funeral and so brings a candlestick down upon her head.

Appearing in "None But the Lonely Heart!"Edit

Synopsis for "None But the Lonely Heart!"Edit

A man who marries homely wealthy women and murders them for their money receives a lonely-hearts letter from a woman who tells him that she lives in a large stone house and enclosures a photograph of a lovely woman whom she admits the picture displays two years ago, not having a more recent snapshot. The man thinks she is so beautiful after having to marry the ugly women that it's time to wind up his racket and settle down. He proposes to her and she accepts, but when he drives out to her address he finds it's a cemetery. At first he thinks he's made a mistake, then the door of the car is ripped away and the woman's corpse tears him out and drags him into her coffin in the mausoleum saying "I've been so lonely, but that will change, now you're here with me."

Retrieved from "https://heykidscomics.fandom.com/wiki/Tales_from_the_Crypt_Vol_1_33?oldid=109578"
Community content is available under CC-BY-SA unless otherwise noted.