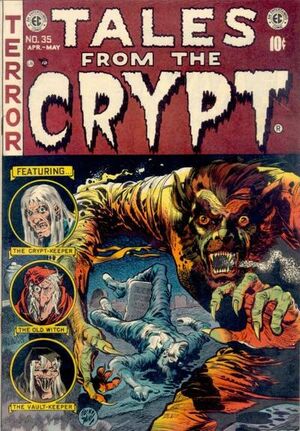 Appearing in "By the Fright of the Silvery Moon!"Edit

Synopsis for "By the Fright of the Silvery Moon!"Edit

1 of 8
Add photo
The sheriff of a small American farm community seizes a man who has arrived from Hungary with his two sons and has him shot with a silver bullet after two men are found torn apart on the night of a full moon. The two boys know that their father was innocent and suspect the sheriff of being the werewolf, so they collect a slingshot and sharpen the edge of a silver dollar to a point to use as a missile during the night of the next full moon. They split up in the darkness when the older brother hears a scream and comes upon the werewolf. He lets fly with the sharpened silver dollar, striking it in the neck, and is stricken with grief when its dead features resolve into those of his younger brother.

1 of 9
Add photo
A man visits his sister in a small town where all the people get off the street and close up shop before sundown due to a recent spate of seventeen vampire killings. He scoffs at such an idea figuring it must be the work of a homicidal maniac as vampires don't exist. He is hungry since the restaurant he was in earlier closed down before he could order something to eat and so he goes for a walk after dinner. He comes upon the same restaurant that he was in earlier and it is open now. He enters the place to get something to eat, but ends up on the menu himself, for it serves as an after-hours eatery to the local vampires.

A man has voodoo dolls made as wedding cake figures in order to get a wealthy woman to marry him. He meets a younger woman, and so to remarry, places his wife's doll under glass so that she suffocates from lack of air. He keeps both dolls until the second wedding as he plans to use them on the cake, but the wife figurine is rotting since it now resembles the woman lying in the grave. The man throws it away, and settles into bed with his new bride, but it gets out of the trash and hauls itself up to the shelf where his doll is kept to push it off, breaking it into a thousand pieces, while in the bedroom the new bride screams in terror.

Appearing in "This Wraps It Up"Edit

Synopsis for "This Wraps It Up"Edit

Three archeologists, one with a bad heart, uncover a tomb with a large treasure. Two of them hatch a plot to get the other's heart to give out, because they know that he will insist on turning over the treasure to the museum. He tells his co-conspirator to go into the tomb and scream then he will send the third man down and his heart will give out from fright when he sees the mummy walking. He hears the scream, and when he sees the mummy walking he can barely keep from laughing as it looks so comical. The third man does indeed drop dead from fright, but the schemer pulls out a pistol and empties it into the mummy as he wishes to keep all the treasure for himself. He can't understand why the mummy doesn't drop, until backing away from its steady advance, he bumps up against the casket and sees the dead eyes of his co-conspirator staring up at him.

Retrieved from "https://heykidscomics.fandom.com/wiki/Tales_from_the_Crypt_Vol_1_35?oldid=109580"
Community content is available under CC-BY-SA unless otherwise noted.