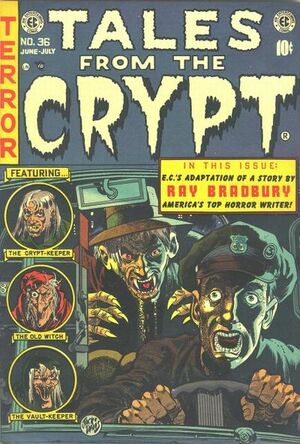 1 of 8
Add photo
A cab driver has a dream that he is pursued by a Dr. Mueller into a basement filled with vampire-occupied caskets. When he wakes, and Dr. Mueller actually shows up at his cab, he recognizes the dream as a subconscious warning the doctor may be dangerous to him so he takes the doctor to the basement he dreamed of and then drains his blood. Afterwards, the vampire cabbie returns to the earthen sod in his trunk to pass the coming day.

1 of 3
Add photo
A woman is convinced that her friend down the hall has been murdered by her husband and that he is disposing of her remains bit by bit via carrier pigeon to a local kennel. It turns out that her husband is in on the deal too, and he comes for her sooner than he anticipated since she has found out.

Appearing in "How Green Was My Alley"Edit

Synopsis for "How Green Was My Alley"Edit

A bigamist is decapitated by his two athletic wives when they find they've been deceived. The golfer putts with his eyes and the bowler uses his severed head.

A mortician avenges himself against perceived slights upon the closed-casket victims of his parlor by violating their bodies until a corpse who isn't quite dead yet overhears his gruesome doings and begs the dead to rise from their graves and stop this horrid man. This they do, and bury Mr. Benedict under a dozen gravestones.

Retrieved from "https://heykidscomics.fandom.com/wiki/Tales_from_the_Crypt_Vol_1_36?oldid=109581"
Community content is available under CC-BY-SA unless otherwise noted.