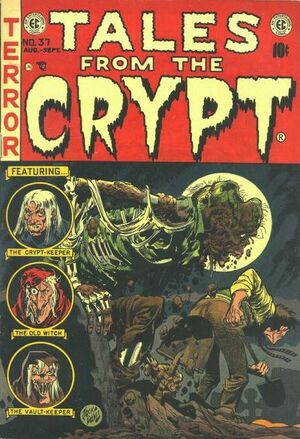 1 of 8
Add photo
A doctor rigs up an elaborate hoax to convince his heart specialist friend that his theory of awareness immediately after death could be true by pretending to poison him but really only administering an anesthetic. When the heart specialist fails to come out from it, they realize he truly is dead, and since the story is told in first person, it confirms the doctor's theory of awareness beyond death since the end of the story reveals that the heart specialist died of a heart attack upon ingesting the supposed poisoned brandy and subsequently relates everything he perceives.

1 of 3
Add photo
A dream character who is a high school teacher narrates his experiences in the dream of a sadistic student. When he realizes the child is waking up, he is terrified at the true end of his existence.

Appearing in "Strop! You're Killing Me!"Edit

Synopsis for "Strop! You're Killing Me!"Edit

A fireman gets rid of an older employee by purposely delaying his response to a fire at his house. His ghost gets revenge by replacing the fire house decent pole with a straight razor.

Appearing in "The Rover Boys!"Edit

Synopsis for "The Rover Boys!"Edit

A doctor gets his revenge on the five members of the medical board who revoked his license to practice medicine by transferring their brains into the bodies of dogs and using their reasoning abilities to make money as a novelty act. They get their revenge upon him by transferring his brain into the body of a horse and chasing him around the town streets.

Retrieved from "https://heykidscomics.fandom.com/wiki/Tales_from_the_Crypt_Vol_1_37?oldid=109582"
Community content is available under CC-BY-SA unless otherwise noted.