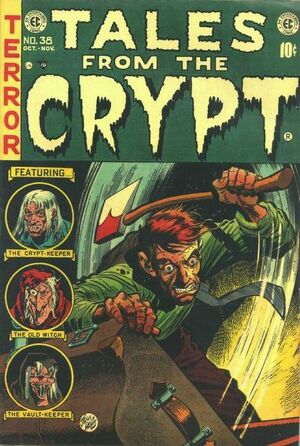 1 of 8
Add photo
This story is narrated by a trunk and concerns the murder of a woman the trunk is fond of. When the murderer attempts to hide in the trunk, he panics and shoots holes through it, whereupon the trunk contracts itself turning the killer into flesh spaghetti and concentrated bone.

Appearing in "Only Skin Deep!"Edit

Synopsis for "Only Skin Deep!"Edit

1 of 3
Add photo
A man marries a woman at Mardi Gras who wears a hag mask. She continually puts off his requests to remove her mask until he becomes agitated enough to bodily pull the mask off of her head whereupon he realizes she wasn't wearing a mask.

An obese practical joker with a stomach problem visits a doctor. He relates his latest practical joke involved getting some old clothes and bloody butchered chunks of horse flesh to take down to the trainyard near where some children regularly play. When the train rolls through, he lets out a scream after dropping the gory mess on the rails, and finds the ensuing panic tearfully funny. The doctor gives him some capsules to swallow for his stomach pain and then reveals that he used to have a wife and two children, one of whom used to play by the trainyard. As a result of the prank, the boy rushed into the path of a truck and was killed. The doctor's wife forgot about the infant she was bathing and it drowned. She died of a heart attack. The vengeful doctor reveals that the capsules contained fish hooks and he straps the obese man to a table and tickles him so that he will literally 'die laughing'.

The Grateful Hoboes, Outcasts, and Unwanteds' Layaways Society is run by a man who read 'Midnight Mess' in Tales from the Crypt #35. He offers a pleasant burial for the penniless. A local reporter thinks their setup odd, and when his boss later tells him that they have buried their 1000th derelict, he is sure something stinks because their cemetery does not have enough area for 1000 graves. After the burial at night, he buys a spade and stakes out the recent grave. Shockingly, he watches as the recent risen grave dirt recedes to the point that it is level with the ground. He sets to digging up the grave and hits a metal trap door that collapses inward to a series of tunnels. The leader of the society pulls a gun on him and explains their purpose. hint: (read the initials of the society)

Retrieved from "https://heykidscomics.fandom.com/wiki/Tales_from_the_Crypt_Vol_1_38?oldid=109583"
Community content is available under CC-BY-SA unless otherwise noted.