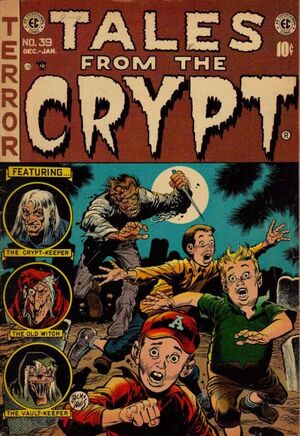 1 of 4
Add photo
Some boys peeping through an undertaker's basement window overhear a plot between the town druggist and undertaker to poison citizens to profit from their funeral costs. When Percy's father becomes a victim, they don't think the police will believe their story and so they resolve to take matters into their own hands. They intercept a tonic from the druggist to the undertaker and substitute a bottle of rat poison and take a cat along to deliver it. When he gets there, the boy drops the bottle and the cat laps up the contents and falls dead. The undertaker assumes the druggist meant to kill him and so knifes him in the cemetery at night. The kids are spying on them and one of them sneezes, so the undertaker takes off after them but can't see well in the dark, and so slips, cracking his skull against Percy's father's tombstone.

Appearing in "The Craving Grave"Edit

Synopsis for "The Craving Grave"Edit

This story is told by a grave. It speaks of spending lonely years of being laughed at by the other graves, because they have children (corpses) while the narrator remains barren. Finally a casket is brought to the craving grave, but the body of Cynthia does not rest in peace. She relates her story, similar to the grave, of being an old maid until a nephew comes to live with her. The nephew is no good and robs her and disappears only to return years later with a wife and claiming to desire forgiveness. Cynthia takes the two of them in, only to be murdered for her money. Cynthia breaks free of the grave, despite its protestations, and brings back the nephew and his wife and buries them alive, making a happy ending for the craving grave who swells with pride among its neighbors who are only singles while it is a double.

Appearing in "The Sleeping Beauty!"Edit

Synopsis for "The Sleeping Beauty!"Edit

In this grim fairy tale, the REAL reason Sleeping Beauty spends all that time sleeping during the daytime hours turns out to be...aw, you guessed it.

Appearing in "Shadow of Death"Edit

Synopsis for "Shadow of Death"Edit

The shadow of a corner newspaper dealer detaches itself from his body one evening and seizes the shadow of an axe in order to assault an unscrupulous competitor who is attempting to ruin him. When they find the corpse of his victim, they are astounded that the corpse casts no shadow.

Retrieved from "https://heykidscomics.fandom.com/wiki/Tales_from_the_Crypt_Vol_1_39?oldid=109584"
Community content is available under CC-BY-SA unless otherwise noted.