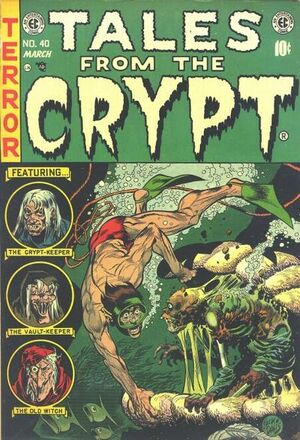 1 of 4
Add photo
A woman plots to run away with the circus animal trainer because her husband, even though he can project his thoughts to her which they use as their act, does not love her. The husband tumbles to the plot and forces the animal trainer at gunpoint into the lion's cage where he is torn apart. The wife suspects him but has no proof and so when the husband is accidentally paralyzed when a beam lands upon him while the circus packs up, she ignores his thoughts for help and coldly advises them not to embalm him so that he is buried alive. He begs her to come back and help him, and he hears digging at the coffin lid, but his luck continues to be very poor as it turns out to be a ghoul who proceeds to devour him alive.

Appearing in "Pearly to Dead"Edit

Synopsis for "Pearly to Dead"Edit

Two navy divers discover a pearl bed while placing demo charges and make plans to go back for them after the war ends. One gets greedy and murders the other one whose corpse then surprises him while he is attempting to acquire the pearls.

A story about a madman who converts a house into a ship in the middle of a prairie.

A man who enjoys tormenting lobster ends up in a car crash where the steering column disembowels him and the flames that erupt broil him alive.

Retrieved from "https://heykidscomics.fandom.com/wiki/Tales_from_the_Crypt_Vol_1_40?oldid=109585"
Community content is available under CC-BY-SA unless otherwise noted.