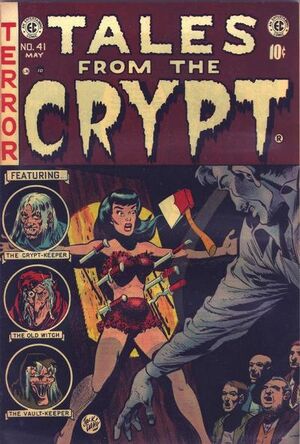 1 of 4
Add photo
A mad surgeon cuts out 75% of his married friend's brain so that he can maintain it in a vat and enjoy the mental stimulation of his company while his dumb wife gets the remaining 25% of his brain and his body and never notices the difference.

Appearing in "Come Back, Little Linda"Edit

Synopsis for "Come Back, Little Linda"Edit

In order to save money, the management of an insane asylum moves the patients into dungeon cells that the hospital was built on. When an inspection notice from the state board arrives, the doctor panics and orders that all the patients return to their wards. Their scheme is undone when one old crazy man refuses to be bullied into silence, crying out to the inspectors that they've taken his beloved 'Linda' away from him. When they follow his headlong dash downstairs, they find that 'Linda' is a rather large dungeon rat.

A circus father attempts to get the knife thrower out of his daughter's life by placing a bar magnet behind the board the knife thrower's wife stands in front of while he does his act, but the daughter convinces the wife to leave him and she takes her place in the act.

A German soldier addled by his experiences in the trenches of WWI is recruited by a butcher in the following war to dispose of patrons in the cellar so that he has plenty of meat to sell.

Retrieved from "https://heykidscomics.fandom.com/wiki/Tales_from_the_Crypt_Vol_1_41?oldid=109586"
Community content is available under CC-BY-SA unless otherwise noted.