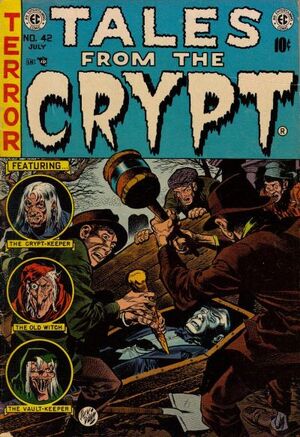 Appearing in "Concerto for Violin and Werewolf"Edit

Synopsis for "Concerto for Violin and Werewolf"Edit

1 of 4
Add photo
A violinist who has read Midnight Mess in Tales from the Crypt #35 suspects that the Transylvania town he has come to visit his old teacher in has a werewolf infestation problem, but his suspicions do not go deep enough, as he overlooks his teacher who replaces his submachine gun with a violin.

Appearing in "By the Dawn's Early Light"Edit

Synopsis for "By the Dawn's Early Light"Edit

A man who has just flown in into New York from Illinois ties up a man he suspects of being a vampire just before dawn and makes him lie in a coffin. When he doesn't fall asleep at dawn, he unties him, and the vampire leaps for his throat reminding him that Illinois is an hour behind New York and he forgot to reset his watch.

A servant of the owner of a silver mine fills his bath with piranha after the mine owner unknowningly works the servant's younger brother to death and shoots his parents who were attempting to extract revenge.

A woman commits suicide when her fiancee's younger brother gets drunk and rapes her. The older brother cuts his head off and uses it as the car ornament that the younger brother had asked him for.

This issue's cover was parodied on the cover of the one-shot underground comic "Tales from the Fridge" #1.

Retrieved from "https://heykidscomics.fandom.com/wiki/Tales_from_the_Crypt_Vol_1_42?oldid=109587"
Community content is available under CC-BY-SA unless otherwise noted.