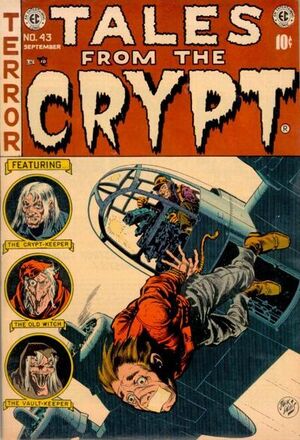 1 of 8
Add photo
An air freight business partner who used to man a bombsite during the war kills his partner by dropping him out of the plane directly where four states meet, knowing he will go free as they squabble over the jurisdiction of the crime. The corpse comes back and gives him a taste of four different execution methods with the last one being final.

A man marries into a family of zombies.

Appearing in "Clots My Line"Edit

Synopsis for "Clots My Line"Edit

A television show about guessing the guest's occupation brings on the manufacturer of red ink. As the panel asks more questions of the guest, they begin to grow annoyed with the host, as the answers seem to dance around the idea that the guest may be a vampire. The host assures the panel the man has a legitimate occupation, but they feel the host has double-crossed them. The host is delighted he has stumped the panel and reveals to the guest what he's won, a coffin, which surprises the guest. The panel descend upon him and drain his blood, relieved that he's not one of them.

Appearing in "Accidents and Old Lace"Edit

Synopsis for "Accidents and Old Lace"Edit

An art dealer murders a man in order to inspire three old sisters who create beautiful tapestries upon witnessing violent death. He goes to check up on them and finds them not working as they claim to be uninspired. He becomes frustrated with them and admits he murdered the man before he sent his car smashing into the wall. They become angry with him for tricking them, saying murder isn't fair. It has to be an accident, like when they pushed father under the train, and the next man into the path of a car and "what is going to happen to you!" They dismember the art dealer and weave his body parts into a tapestry.

Retrieved from "https://heykidscomics.fandom.com/wiki/Tales_from_the_Crypt_Vol_1_43?oldid=109588"
Community content is available under CC-BY-SA unless otherwise noted.