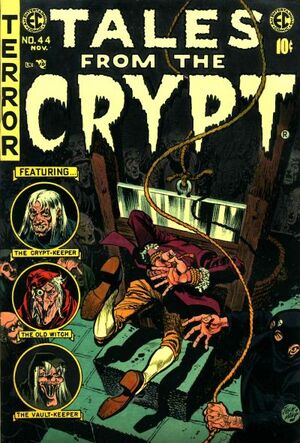 1 of 4
Add photo
A sea captain murders a man for his wife by having him row out to a plague island where he contracts the disease. When he is rotting away they toss him overboard, but a whale swallows him and then vomits him up. The captain knows the spew is valuable for perfume so he collects it and presents it to the murdered man's wife where she dons it in the bathroom and opens the door to reveal her instantaneously rotting flesh.

Retrieved from "https://heykidscomics.fandom.com/wiki/Tales_from_the_Crypt_Vol_1_44?oldid=89803"
Community content is available under CC-BY-SA unless otherwise noted.