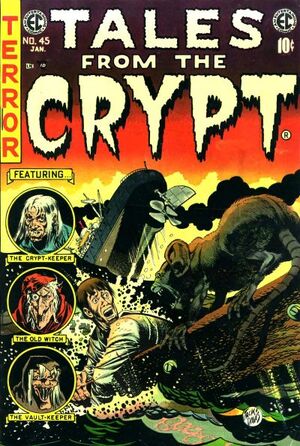 1 of 4
Add photo
A man and a rat from a ship wreck wash up on an island and eye each other warily as the only food source available.

A man assumes that the body of the governor of the penal colony he is a prisoner in will be sent back to Paris, so he kills him with a poisoned dart from a blowgun and makes plans to switch places with his body in the casket. They nail him in and bury him at sea.

A maniac ax-murderer assumes his victim's identity in his dreams until he is compelled to return to the scene of the crime to murder the victim's wife as well.

An old millionaire falls in love with a young woman but he doesn't want her to marry him for his money so he tells her he's poor. She puts him off telling him his face is too old-looking so he gets a doctor to do an expensive face transplant with a younger man. She is amazed that he now looks young but puts him off again by saying he still has an old man's body. He gives more of his fortune to the young man and the doctor to transfer torsos. She still isn't satisfied because of his legs. He spends the last of his fortune to swap out his legs and she marries the man he has swapped body parts with because she only wanted to marry a millionaire.

Retrieved from "https://heykidscomics.fandom.com/wiki/Tales_from_the_Crypt_Vol_1_45?oldid=109590"
Community content is available under CC-BY-SA unless otherwise noted.