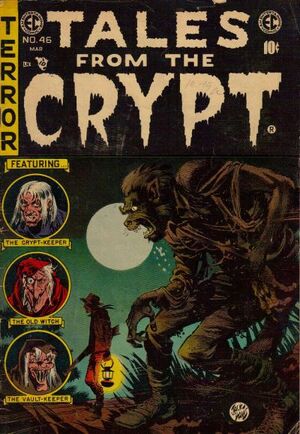 1 of 3
Add photo
The mayor of a small town vows revenge upon a werewolf that kills his wife. On the night of the next full moon he and his posse encounter a woman they suspect may be the culprit so he returns to his library to check on the signs of a werewolf in human form. When he enters the darkened room, he sees the werewolf's snarling face looming in front of him. He empties his rifle full of silver bullets into the monster and is astonished that silver bullets didn't kill it. His posse hears the shots and when they enter and turn on the lights, they see the mayor werewolf standing in front of a full length mirror.

1 of 7
Add photo
The blind victims of an unscrupulous and cruel director lock him and his dog up for several days without food and then release them into a maze with razor blades embedded into the walls. And then turn out the lights.

A woman and her parents move in with a man they nag constantly to get ahead in the world because he can't afford their demands for gadgets. Eventually the nagging pushes him over the edge and returns from the kitchen brandishing the meat cleaver. He giggles to the arresting officers "I not only got ahead, I got three heads." as they look over the three severed heads on silver platters in the dining room.

A man is murdered by a creature made out of old rags in retaliation for killing the woman who was kind to the rag creature.

Retrieved from "https://heykidscomics.fandom.com/wiki/Tales_from_the_Crypt_Vol_1_46?oldid=109591"
Community content is available under CC-BY-SA unless otherwise noted.