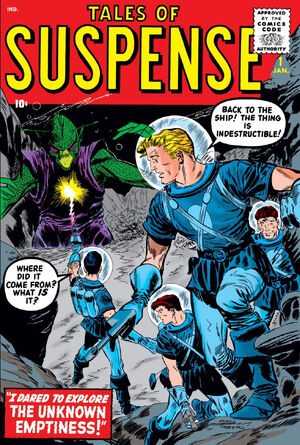 Appearing in "The Strangers from Space!"Edit

Synopsis for "The Strangers from Space!"Edit

In the year 2000 mankind has conquered space and set up a colony on Mars. One day an alien ship appears over the Earth city New Niagara. Fearing the ship may be hostile the Defense Director Krenkle orders the alien craft to be destroyed. Disagreeing Lieutenant Morrow attempts to stop the soldiers from using a weapon on the alien ship as it landed. Morrow jumps in front of the ray cannon and takes the full brunt of the blast. An alien exits the ship, appearing human, and explains that they did not mean harm and only came to Earth to repair their ship. Now that their ship is repaired they will return to negotiate trade routes. They then take Lt. Morrow to heal him. Leaving we see that the aliens don't really look human at all, and they reveal that it took them 100 years to travel to Earth and that perhaps next time the humans will be peaceful on their next visit.

(Text story) Snoop Scooper was just a newspaper boy when his sensitive nose was able to detect the start of a warehouse fire. After calling the authorities he returned to the Herald and reported the story he was soon given a job. One day Snoop decides to insure his nose at the "Unusual Insurance Company", where he meets Marsha Marlow. Soon after Marlow gets a job at the Herald as well and invites Scooper over to her place for a party. Later she reveals that she fell in love with him the moment she saw him and wished to be with him. She reveals that her ears are "electronic marvels" and can pick up radio broadcasts. Soon they are married and have a child whose eyes can magnify like a telescope. Of course they all become news reporters and live happily ever after.

Appearing in "I Dared Explore The Unknown Emptiness!"Edit

Synopsis for "I Dared Explore The Unknown Emptiness!"Edit

In the year 2478 Dr. Jonathan Marteens had made public his Cobalt fuel formula which enabled man to finally travel space at great speeds on an unlimited fuel source. Upon the revelation of this discovery a large congress of scientists, doctors and military men assemble to find a use for the new fuel source. The primary concern is to find a solution to the over population of the Earth, which is reaching a critical stage. The decision is to train a manned space flight to find a new world suitable for the human race to colonize and to ease the burden on Earth. Soon a crew of volunteers are selected and trained to pilot three ships into space. This story follows on of the crews, the first planet they visit (dubbed "Atavisius") was unsuitable because it had creatures similar to dinosaurs. After dodging meteors, the second planet they found had no oxygen in the atmosphere. The third planet dubbed "Automana" was the home of metallic men who proved to be hostile. The third planet "Plethorus" appeared to be alive and landing on it risked being absorbed into the planet. Finally they land on "Mundus" where they find the people there are peaceful but suffer the same conundrum. The crew then returns to Earth, although they did not find a suitable planet, the captain doesn't believe that they failed in their mission, there is a suitable planet for the human race: Earth, and they must find a way to solve their problems without colonizing another planet.

Appearing in "The Day I Left My Body!"Edit

Synopsis for "The Day I Left My Body!"Edit

A criminal named Wells is grazed by a prison guards bullet as he makes an attempt to escape. Not killed by the bullet, Wells finds that his spirit has left his body. In his spirit form he decides to try to make something of the experience, he finds his moment when Martin Shaw, the best criminal lawyer in the country asks about the shot he heard. Somehow, Wells is able to implant the idea in Shaw's mind to help Wells get a new trial and get him off the hook for the crimes he's committed. Now linked to Shaw's mind, Wells pushes Shaw to the brink of exhaustion working on his case and trying to get him off. At the end of the new trial, Wells is found guilty of first degree murder, a crime punishable with death in the gas chamber. As Wells is being escorted off to prison again he overhears the other lawyers explaining that Shaw appeared so tired that he presented the case like an novice.

Appearing in "He Fled in the Night"Edit

Synopsis for "He Fled in the Night"Edit

In old England a young bank employee for Cole and Dunson wakes from a dream where he was a night fighting dragons. He comes to the conclusion that his life is dull an unexciting, that he's been wasting his life and seeks adventure. After day dreaming on the job about being a hunter in the stone age, he gets tired of working at the bank and quits his job. That night he then breaks off his engagement to his finance. The next day he gets the idea to sign up for a sailing expedition, under the impression that he'll find a desert island full of riches and people that will worship him as a kind. He signs up and on the boat he has fantasies of coming back to England with his riches and having any woman he wants. He muses that the days ahead will be exciting, and he is sure of it as sure as his name is Robinson Crusoe.

Appearing in "Prisoner of the Satellites!"Edit

Synopsis for "Prisoner of the Satellites!"Edit

One night a number of yellow glowing meteors crash on Earth in front of Mark Coren, when he recovers from the shock he finds that the fragments of the meteors are spinning around him like orbiting satellites. Suddenly, Mark also shrinks down to a small size. He (and other objects effected by the meteors) is found by some scientists who try to determine how to reverse the effect. Little do they know this is phase 1 of a plan caused by aliens who are observing aboard a ship hidden behind the dark side of the moon. They wait to see if the humans fail at finding a cure for the meteor attack before launching phase 2 of their invasion. Back on Earth the scientists construct a "moon satellite" to place Mark in and launch him out into Earth's orbit hoping that the cosmic rays out there would reverse the effects of the meteor. In space, the orbiting satellites around Mark's body soon lose their power and fall to the floor of the satellite and soon Mark begins to resume his normal size. The moon satellite lands on Earth and Mark is freed, the watching aliens see this and determine their mission is a failure and abort their invasion plans. Meanwhile the scientists find Mark and inform him that he will resume his normal size in no time and that there have not been any other meteor attacks.

Retrieved from "https://heykidscomics.fandom.com/wiki/Tales_of_Suspense_Vol_1_1?oldid=1455164"
Community content is available under CC-BY-SA unless otherwise noted.