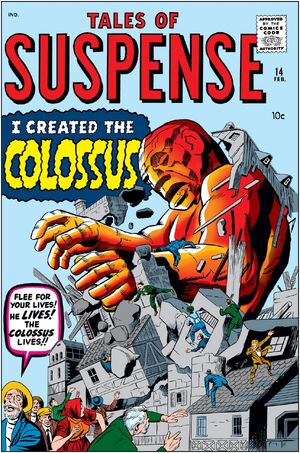 Appearing in "I Created the Colossus"Edit

Synopsis for "I Created the Colossus"Edit

Boris Petrovsky sculpts a Colossus as a monument for the Soviet Union. He has completed the statue and is awaiting the apparatchik who will give it the Party's approval. One night a UFO crashes near his home, and Petrovsky finds a crustaceanoid from the world of Kigor. To survive on Earth, it transfers its consciousness into the hundred-foot statue. Somehow it can make the statue move, and the Kigor (possibly still in pain) goes on a rampage in Moscow. The Red Army fails to stop it. Only when another Kigor ship arrives and rescues the first one does the statue stop.

Appearing in "I am Gorak!"Edit

Synopsis for "I am Gorak!"Edit

A master illusionist breaks the fourth wall to address the reader directly with a threat that the reader will disappear now that Gorak has stopped thinking of him/her, but Gorak fades away instead, surprised, as the last panel shows the comic book has been set down now the story has reached its end.

Retrieved from "https://heykidscomics.fandom.com/wiki/Tales_of_Suspense_Vol_1_14?oldid=1755227"
Community content is available under CC-BY-SA unless otherwise noted.