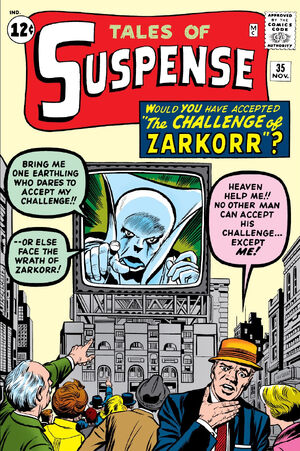 Appearing in "I Accepted the Deadly Challenge of Zarkorr!"Edit

Synopsis for "I Accepted the Deadly Challenge of Zarkorr!"Edit

In the year 2065 a 45 year old space pilot doesn't take his decommission lying down. He fabricates an alien costume he names Zarkorr who represents a Galactic Federation with an ultimatum for Earth. Since the people of Earth are beginning space travel, they must pass a test to determine their society's level of maturity or be quarantined or even possibly destroyed. They must have a pilot fly a spacecraft to Mars manually, not using any electronic computation. The current generation of pilots have all been trained to use the computers, but since he has only been decommissioned for three months, the space pilot completes the task and is successful in his ruse.

Appearing in "I Must Enter the Tomb of Tut-Am-Tut!"Edit

Synopsis for "I Must Enter the Tomb of Tut-Am-Tut!"Edit

Synopsis for "Never Threaten a Witchman!"Edit

An untalented bald actor wants to receive the leading parts in plays so he goes to a witchman for a potion that will help him. The witchman tells him that he does have such a potion but does not want to give it to him, because it is too dangerous. The actor is heedless and pulls a gun on him. The witchman relents and gives the actor the potion, but the actor finds that after drinking it he can only find work as a circus freak because his hair grows so quickly.

Appearing in "Revolt of the Robots!"Edit

Synopsis for "Revolt of the Robots!"Edit

A man puts down a revolt of the robots and vows to hunt down and destroy every last one of them not knowing that he is, in fact, a robot.

Retrieved from "https://heykidscomics.fandom.com/wiki/Tales_of_Suspense_Vol_1_35?oldid=1455198"
Community content is available under CC-BY-SA unless otherwise noted.