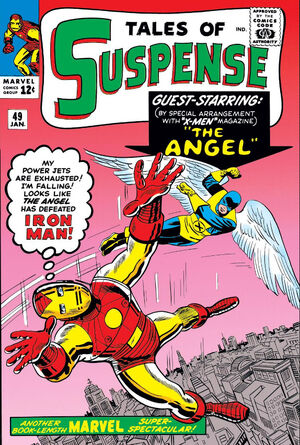 Appearing in "The New Iron Man Meets the Angel!"Edit

Synopsis for "The New Iron Man Meets the Angel!"Edit

Synopsis for "The Saga of the Sneepers!"Edit

The extraterrestrial known as the Sneeper, hale from the Milky Way planet of Sneep. They were initially far more advanced than the humans of earth. As a people they developed spaceflight early on and used to invade and conquer several unnamed planets. While for their next target they discovered a small blue planet called Earth. It was too far from their planets to be reached easily, but due to the interesting life forms their, they decided to keep it under surveillance anyway.

At first humanity was technologically and culturally primitive compared to the space-faring Sneepers. The cavemen were deemed beneath the Sneeper's consideration and they continued to monitor them for amusement. The rise of Empires such a Rome alerted them to humanity’s capacity of advancement and conquest. Next stage was the Renaissance which alerted the Sneepers to the existence of human creativity. The Industrial Revolution had them shocked at the speed of which humanity could progress.

The Sneepers as a people developed at a much slower rate taking twice as long as humanity had to reach this point in development. They started worry that the humans one day might take control of their portion of galaxy. When humans discovered flight, the Sneepers figured rockets and space flight would be the next step. The Sneepers developed super weapons to be ready for a possible military conflict with Earth. The humans then developed nuclear technology that quickly surpassed their own methods of energy production.

The Sneepers waited for the next step in the human’s development, they were happy to see humans threaten one another with their nuclear weapons. By the 1960s, the arms race and conflicts in Cuba and Vietnam, riots and strikes managed to persuade that it’s only a matter of time before the humans would destroy themselves. They decided to their violent plans against Earth, waiting to see the humans destined self-destruction.

Retrieved from "https://heykidscomics.fandom.com/wiki/Tales_of_Suspense_Vol_1_49?oldid=1629835"
Community content is available under CC-BY-SA unless otherwise noted.