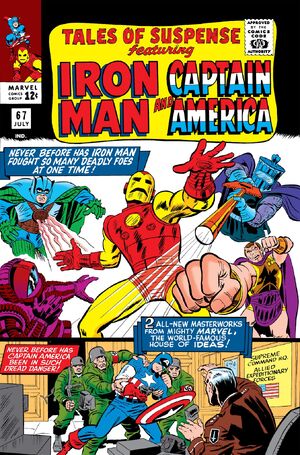 Appearing in "Where Walks the Villains!"Edit

Synopsis for "Where Walks the Villains!"Edit

Synopsis for "Lest Tyranny Triumph!"Edit

Last issue, Captain America was captured by the Red Skull and brainwashed into going to assassinate the Allies' top military leader. Cap leads an army of Nazi soldiers on a training routine before going on their mission.

Meanwhile, Bucky, who was also captured by the Nazi's is about to be executed by a Nazi firing squad, however their guns weren't loaded and it was all a cruel joke, leaving them to wonder when they will really be executed. However, this never happens, as Bucky leads a rebellion which allows the prisoners and himself to get free. Bucky then begins searching around the Nazi base to find Cap.

Elsewhere, the Red Skull has brought Captain America to Hitler to show him that Cap is now fully under his control. Convinced, Hitler then orders an attack on London. Learning of the Nazi's plot, Bucky knocks out a Nazi soldier and takes his place on the plane. Landing in London which is in the midst of an air strike, the Nazi soldiers parachute onto British soil. There, Bucky tries to talk sense into Cap, however, he is taken down by a bunch of Nazi soldiers while Cap is ushered onward. Bucky manages to fight them off and chase after Cap.

Meanwhile, Cap and the Nazi troops make their way the Allied commander's office where Cap pulls a gun to shoot the commander, but pauses. One of the Nazi soldiers then has to force Cap to pull the trigger... This story is continued next issue.

Retrieved from "https://heykidscomics.fandom.com/wiki/Tales_of_Suspense_Vol_1_67?oldid=1630669"
Community content is available under CC-BY-SA unless otherwise noted.