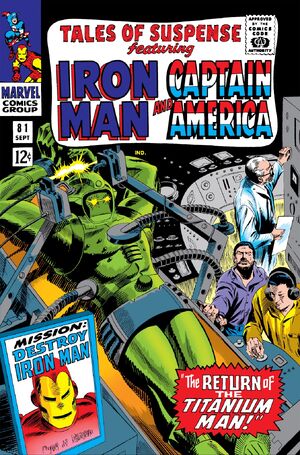 Appearing in "The Return of the Titanium Man!"Edit

Synopsis for "The Return of the Titanium Man!"Edit

Synopsis for "The Red Skull Supreme!"Edit

Continued from last issue... The Red Skull now has in his possession the Cosmic Cube, a device created by AIM that would allow it's user to shape reality to their whims, and the only person to stop the Skull from using it is his arch nemesis Captain America.

Cap's first attack is easily defended, and the Skull tells Cap how after he destroys his old foe he will use the cube to make the entire human race his slave and then root out the weak in order to create an army of the strongest people on the planet to launch war against the rest of the universe.

The Skull then creates a humanoid out of the islands very soil and sets it to attack Captain America until he grows tired and sends the creature into limbo. When he is about to do the same thing to Captain America himself, Cap tricks the Skull into sparing him by convincing him that the greatest victory would have his greatest foe, humbled and subservient to nobody but the Skull.

Finding this idea appealing, the Skull accepts and then creates himself a suit of knightly armor to match his perceived destiny to be king of the world. When "knighting" Captain America, Cap uses it as the perfect opportunity to catch the Skull off guard and knock the cube out of his grasp. During their fight to get the cube back the Skull uses it to try and destroy Cap by tearing the island apart. However in the scuffle Cap manages to knock the cube out of Skull's hand making it lost at sea and the Skull falls in right after it, the weight of his armor dragging him to the ocean floor. Cap survives the experience, presuming that the Skull had died, as for the cube, it is lost at the bottom of the sea.

Retrieved from "https://heykidscomics.fandom.com/wiki/Tales_of_Suspense_Vol_1_81?oldid=1630683"
Community content is available under CC-BY-SA unless otherwise noted.