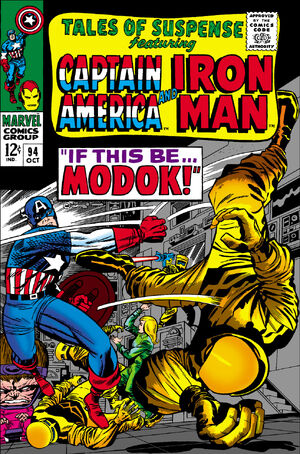 Appearing in "The Tragedy and the Triumph!"Edit

Synopsis for "The Tragedy and the Triumph!"Edit

Synopsis for "If This Be... Modok!"Edit

Now, free from paralysis and face to face with Modok -- a being with a giant head on a powerful hover chair -- Captain America finds himself in a battle against this being who can fire powerful mind bolts. While Modok and Captain America battle it out, AIM takes this as an opportunity to destroy Modok and free themselves from his slavery. Preparing an escape craft, a group of AIM soldiers then travel to Modok's control room and fire upon their leader. Believing him to be dead they then try to kill Captain America and Agent-13 who easily defeat them.

Cap and Agent-13 then force themselves on board the escape sub just as Modok -- with his last ounce of strength -- uses his mental powers to set off a detonator which causes the entire base to explode. Just managing to escape, Captain America forces the AIM soldiers to surrender and turn themselves over to SHIELD.

Retrieved from "https://heykidscomics.fandom.com/wiki/Tales_of_Suspense_Vol_1_94?oldid=1630696"
Community content is available under CC-BY-SA unless otherwise noted.