Tales of the Great Disaster 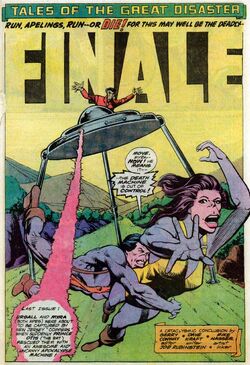 Tales of the Great Disaster was a series of vignettes featured as back-up stories in the pages of Kamandi and Weird War Tales. The setting was the alternate reality of Earth-AD and took place after the time of OMAC, but before the time of Kamandi. The driving focus of the feature was an event known as the Great Disaster. The stories showed the gradual evolution of society and the development of humanoid animals in a post-apocalyptic future. "Tales of the Great Disaster" was first featured in Kamandi #44 and continued until Kamandi #46. Stories originally intended for issues #47-48 were instead printed in Weird War Tales #51 and Weird War Tales #52. The last two stories were reprinted in Shadow of the Batman #2 and Shadow of the Batman #3.

Retrieved from "https://heykidscomics.fandom.com/wiki/Tales_of_the_Great_Disaster?oldid=1568396"
Community content is available under CC-BY-SA unless otherwise noted.