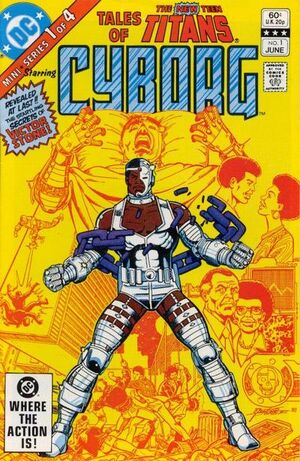 At Changeling's suggestion, the New Teen Titans take a week-long camping and hiking trip together in the Grand Canyon. Conversation around the campfire leads to Cyborg's telling the story of his childhood and his origin. As a youngster, Victor Stone was used by his research scientist parents in their intelligence-boosting experiments, with the result that he became a child genius. However, he lacked any normal peer-group companionship, until he met street-gang leader Ron Evers, who involved him in petty crime. At his mother's insistence, Victor was then allowed to attend public school rather than continuing with a private tutor, whereupon he became an outstanding athlete, forsaking his parents' dream of a scientific career for him. His injury in a gang fight deepened the rift between Victor and his parents, and ended his friendship with Ron, as well. Then, the accidental escape of a protoplasmic creature from another dimension in an experiment of the Stones' resulted in the death of Victor's mother and his own seemingly fatal injury. Victor was then rebuilt by his father as Cyborg, a being half-man and half-mechanical parts. After a five-month period during which he learned to control his new body, Cyborg moved out on his own, only to discover that his transformation had cost him both his girlfriend and his athletic career. He was then recruited by Ron Evers, who intended to make him a scapegoat in a plot to blow up the United Nations Building. Instead, Cyborg foiled the plot, and Evers was lost and presumed dead in the aftermath of their battle.

Retrieved from "https://heykidscomics.fandom.com/wiki/Tales_of_the_New_Teen_Titans_Vol_1_1?oldid=1673227"
Community content is available under CC-BY-SA unless otherwise noted.