Start a Wiki
Part of the 'Sinestro Corps War' event 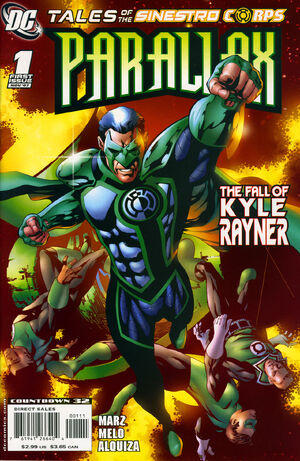 In his mind, Kyle Rayner imagines he is in his mother's house, looking at an old picture she had several stories about getting. Kyle is trying to leave, to retake control but he can not leave. He can, however, observe what is going on, and sees himself fighting Hal Jordan.

At the same time, Parallax, in his Kyle Rayner inspired outfit, comes for a "visist". He remarks on all that is going on, and all the people he has loved who have died: Alex, Donna, Jade, and finally his mother Maura. He also torments Kyle by saying that he is the reason they all died.

Still having some control, Kyle assumes his Ion suit and attacks, with a green energy constructs, but Parallax takes them down, and reminds Kyle that he is no longer Ion. Kyle agrees, and assumes his original uniform, complete with ring. Parallax is still able to overpower Kyle, and forces him to see what is going on outside—the death of Jack T. Chance. Kyle looses control and drives his pencil into Parallax's eye, only for Parallax to laugh, saying that he is still trapped in his own mind, and leaves.

Enraged, Kyle begins smashing things, and picks up the old painting, when he suddenly sees that the name of the artist is Maura Rayner. She had painted it all along, intended to be her gift to him, and that he is who he is because of her. In that way, she'll be with him, and he isn't alone. It fills him with hope, and he soon finds himself in the field, walking forward. As he walks he sees a light ahead.

Retrieved from "https://heykidscomics.fandom.com/wiki/Tales_of_the_Sinestro_Corps:_Parallax_Vol_1_1?oldid=1713882"
Community content is available under CC-BY-SA unless otherwise noted.