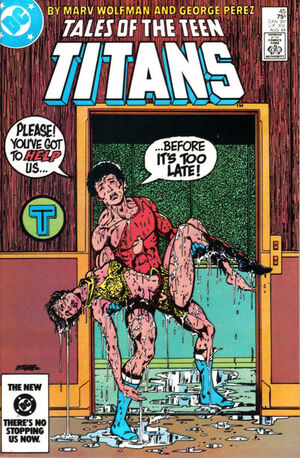 Aqualad is seriously ill and drags a dying Aquagirl into Titans Tower. He struggles to bring her to the pool to get fresh water into her system, but passes out mere inches away. Across town, Changeling is still having difficulty coping with the death of Terra. He busts up a group of arms dealers and nearly kills them in his anger. Cyborg shows up and tries to talk to Gar, but Changeling tells him that he is through talking. Nobody was around for him when he needed help, so he has no interest in confiding in his teammates. Meanwhile, Dick Grayson attends an extremely uncomfortable bachelor party being held for Terry Long. Terry's inebriated brothers hire a strippe for him who jumps out of a giant cake. At Manhattan College, a boy named Steven tries to bond with Raven whom he has developed an interest in. Raven politely rebuffs the boy's advances and gets into a car with Jericho. On Paradise Island, Donna asks Queen Hippolyta's blessing to marry Terry Long. Traditionally, if an Amazon chooses to reside permanently in Man's World, they must forsake their Amazonian powers. However, as Donna is not a true Amazon, Hippolyta does not feel the need to enforce this restriction. As a wedding gift, Donna's "sister" Diana gives Donna a new set of magic bracelets. Later, everyone regroups at Titans Tower where they discover the dying Aqualad and Aquagirl. They quickly submerge them in a special water solution and carefully pump fresh sea water into their systems. When they revive, Aqualad tells them that the H.I.V.E. has attacked Atlantis. Nightwing is tired of the H.I.V.E. and wants to put a stop to them once and for all.

Retrieved from "https://heykidscomics.fandom.com/wiki/Tales_of_the_Teen_Titans_Vol_1_45?oldid=1673253"
Community content is available under CC-BY-SA unless otherwise noted.