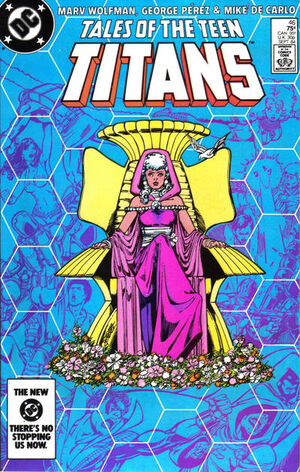 Human garbage! The daughter of Trigon cannot be stopped!

The Teen Titans, along with a revitalized Aqualad and Aquagirl travel through the Atlantic Ocean to the coordinates of the H.I.V.E.'s undersea station. As they approach the base, the H.I.V.E. Mistress consults with her Council of Seven about Operation: Waterworks. Aquagirl and Aqualad tear up two stalagmites and hurl them like mini-torpedoes at the base. The projectiles tear a hole through the station and dozens of H.I.V.E. agents wearing deep-sea diving suits spill outward. While the Titans engage the agents in their T-Sub, Aquagirl swims through the airlock and onto the base. She begins interrogating one of the H.I.V.E. agents, but another one gets the drop on her and stuns her with an energy weapon. Aboard the T-Sub, Raven telepathically feels Aquagirl's shriek of pain and teleports onto the base. Suddenly, the evil influence of her demonic father Trigon overwhelms her and she viciously begins slaughtering every H.I.V.E. agent in the room.

Back in New York, Vic returns home to find his grandparents, Maude and Tucker, waiting for him in his apartment. He is not thrilled to see them, and still resents them for the fact that they failed to attend his father's funeral. Vic angrily tells them to leave. Maude fires back at him and after a few terse words, they finally make up.

Elsewhere in the city, detective Lt. "Tank" Sherman is called to the scene of a potential mugging. The would-be victim gives her statement and tells Sherman that her attacker was nearly mauled to death by a savage green tiger.

Back at the H.I.V.E. base, the Titans board the station and regroup with Aquagirl, Aqualad and Raven. Jericho uses his powers to take control of one of the surviving H.I.V.E. agents. They fight their way through a blockade of armed men and travel deeper towards the command core of the station. From her central meeting room, the H.I.V.E. Mistress seals off the access tunnel where the Titans are located and jettisons the entire chamber into the sea. Once the pod is far enough away from the base, she activates a trigger which causes it to explode.

Retrieved from "https://heykidscomics.fandom.com/wiki/Tales_of_the_Teen_Titans_Vol_1_46?oldid=1482574"
Community content is available under CC-BY-SA unless otherwise noted.