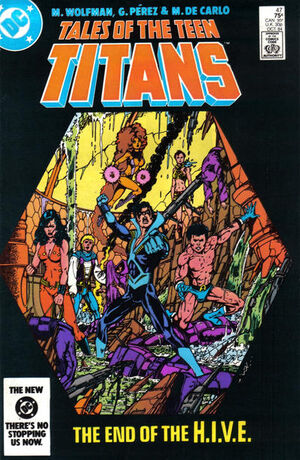 Believing that the Titans have been destroyed, the H.I.V.E. Mistress offers a toast of victory. However, they soon discover that Raven saved her comrades from the explosion by enveloping everyone inside of her soul-self and teleporting aboard the H.I.V.E. station. The Titans begin fighting through another throng of H.I.V.E. shock-troops and Starfire is injured when her body is stunned by electrified cables that drop down out of the ceiling. Jericho takes control of her body and presses onward deeper into the H.I.V.E. base.

At Titans Tower, Changeling returns home, still lamenting the loss of Terra. Cyborg enters the room and the two have a heart-to-heart. Gar's spirits are lifted by the arrival of an old friend - Jillian Jackson. Jillian was once Changeling's high school sweetheart.

Back at the H.I.V.E. base, the Titans continue fighting their way through an endless morass of soldiers until they come to a torpedo bay. They discover that the H.I.V.E. intends on destroying Atlantis as a show of power in the hopes that their reputation will enable them to blackmail world leaders into surrendering to them. The H.I.V.E. Mistress launches the torpedo, but Aqualad manages to disable it before it reaches Atlantis. Realizing that the battle is lost, the H.I.V.E. Mistress murders her Inner Council then takes her own life. With the battle won, the Titans wave goodbye to Aqualad and Aquagirl, board the T-Sub and return home.

Retrieved from "https://heykidscomics.fandom.com/wiki/Tales_of_the_Teen_Titans_Vol_1_47?oldid=1482575"
Community content is available under CC-BY-SA unless otherwise noted.